Flameway is built around the Burning Barrage paragon and heros designed to maximize its potential. Burning Barrage provides mass damage and degen and both offensive and defensive support for the team but in order to make the most of this build we need more burning, damage buffs such as Splinter Weapon and Cracked Armor, AoE snaring capability and additional damage from other team members to spike entire groups quickly. The team below is what I consider to the the optimal companions for Burning Barrage at present but it is certain to be improved over time. The reduction of armor levels in hardmode has made this build stronger since Barrage does more damage and elemental damage is greater as well. Some characters are secondary Paragons so that they can bring Signet of Return; this is not required, but I like this skill because it resurrects fallen comrades at 40% health and 8% energy even at 0 Leadership, it costs nothing to activate and recharges quickly... in short, it is a good combat resurrection skill.

This team has completed elite missions and the Winds of Change quests in hardmode without using any consumables and I believe it has surpassed any reasonable standard of worthiness. In the few areas where it would not be effective (e.g. foes immune to Burning) you can change the burning skills or else change to a different team; Kway is a good alternate. Rangers can take the place of the paragon fairly easily, just run R/W with Barrage, Save Yourselves, EVAS and EBSoH. You lose some defense against armor ignoring damage but you gain defense against armor-affected damage and the barrage damage is slightly better.

If you don't have all of these heroes don't worry, henchmen will do fine. For the remainder of the group, the following henchmen are best: barrage ranger (Aidan), mesmer (Odurra/Dunham), elementalist(Cynn), healer(Mhenlo). If you are with another player, physical attackers and elementalists have good synergy, especially those that can cause Burning.

Author's note: I bind keys so that "9", "0", and "-" activate skill 1 on each of the first three heroes, so I get Splinter Weapon, Judge's Insight and Protective Spirit on demand... it's like having 11 skills on your bar.

Mass damage and strong team defense. This can provide roughly 60% damage reduction against everything, including armor ignoring damage. Team skills such as Enfeebling Blood and Stand Your Ground reduce damage even further. More info and screenshots at http://wiki.guildwars.com/wiki/User:Khomet/Burning_Barrage

Mass damage and defense from minions and spells and good protection as well.

This hero brings area-effect snaring (Earthen Shackles), blind, knockdowns, and damage. Judge's Insight increases physical damage (from barrage) by up to 87% against any kind of foe and it completely destroys minions and undead.

This hero delivers AoE damage and interrupts, destroys opposing spirits and minions and has mass hex and enchantment removal.

This hero brings mass healing, mass hex removal and instant resurrection. With Unyielding Aura active Divine Healing and Heaven's Delight are healing the whole party for 96 every few seconds, and Gift of Health heals for 230 with the divine favor bonus... it's like an unconditional non-elite Word of Healing. Divine Intervention works pretty well here, it can prevent death and provide a huge heal at the same time, and this is usually enough so that the hero never needs to rez with UA at all; it also makes Deny Hexes remove up to 4 hexes at once. Also consider Signet of Devotion as an alternative. 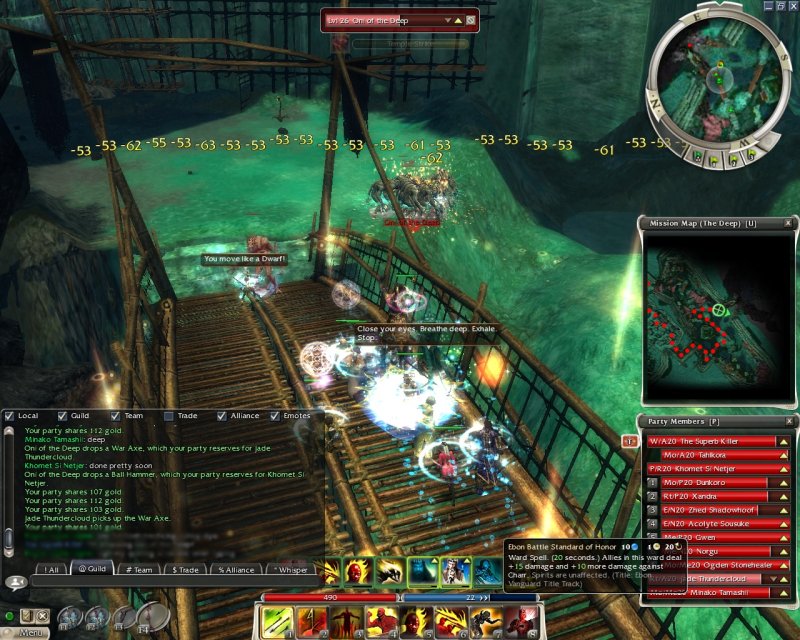 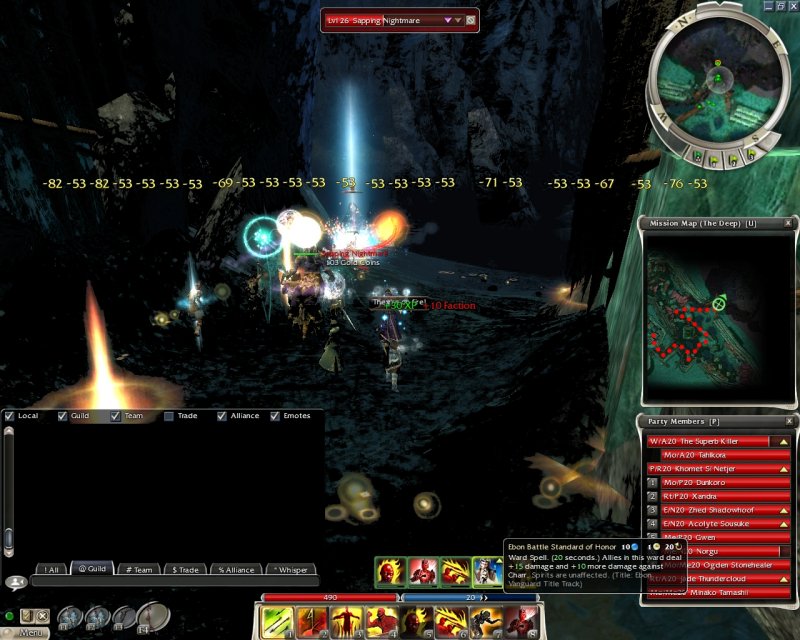 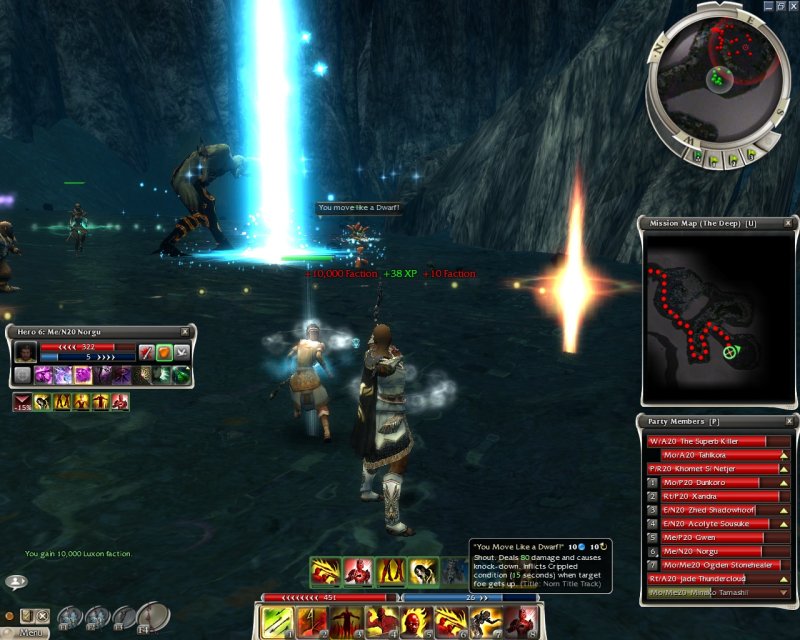 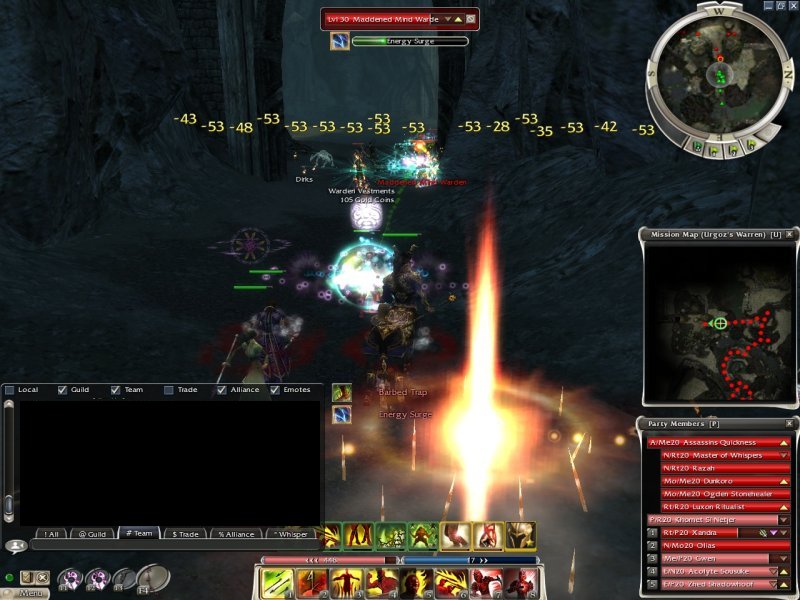 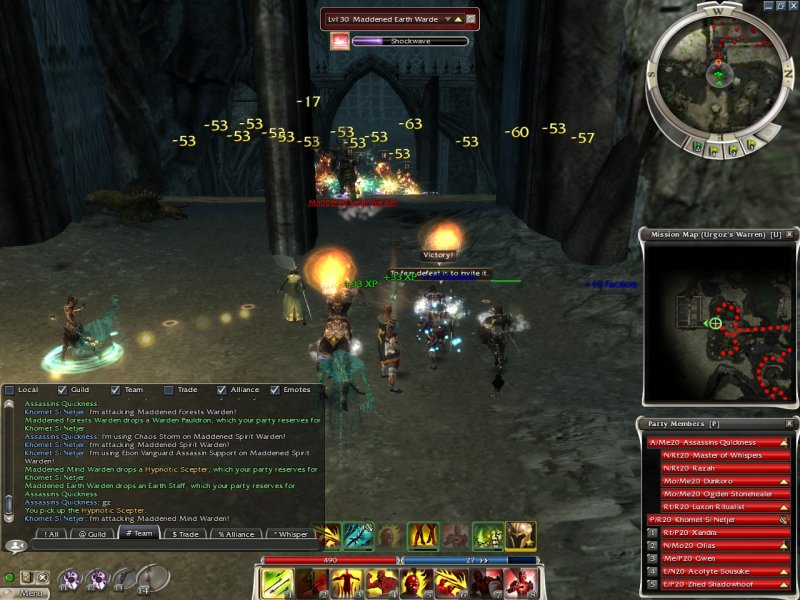 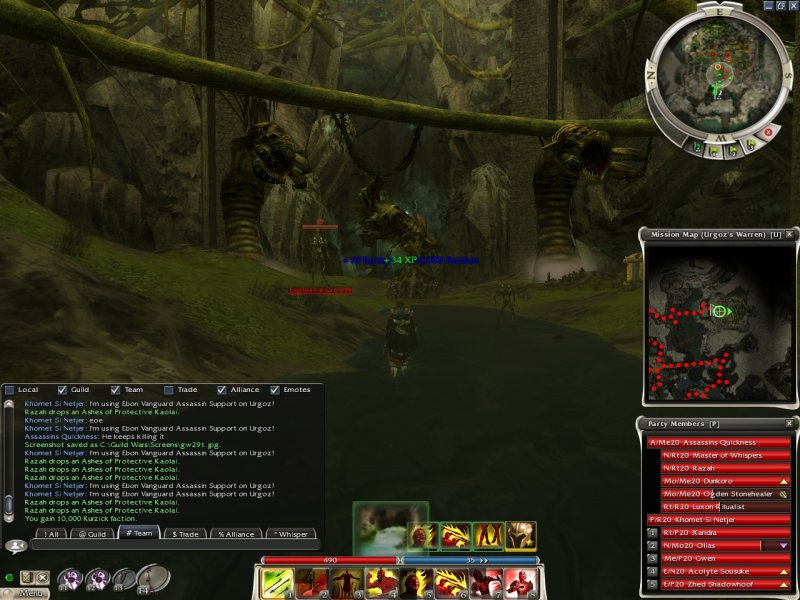 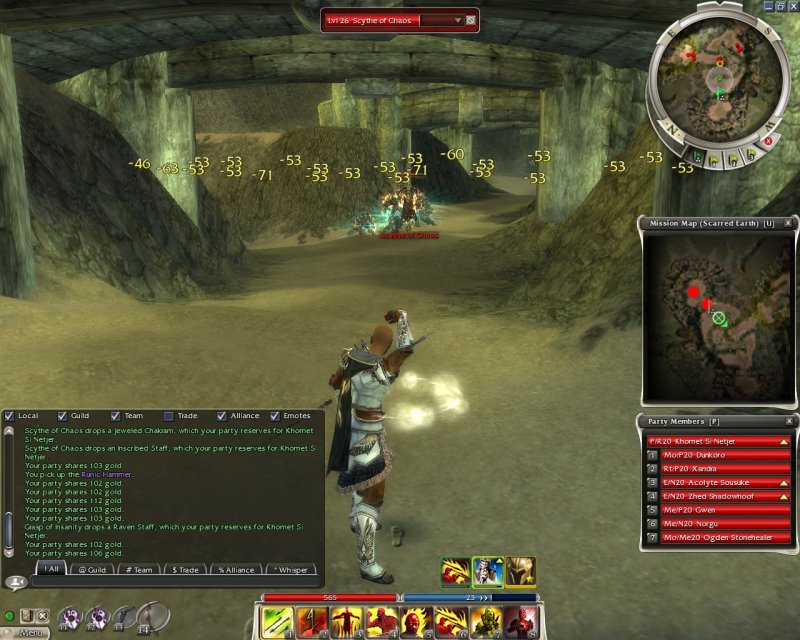 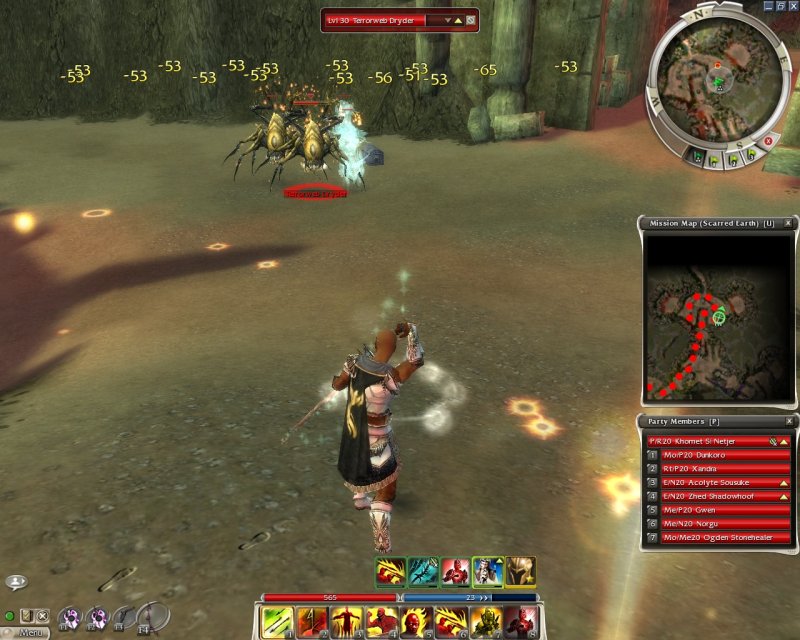 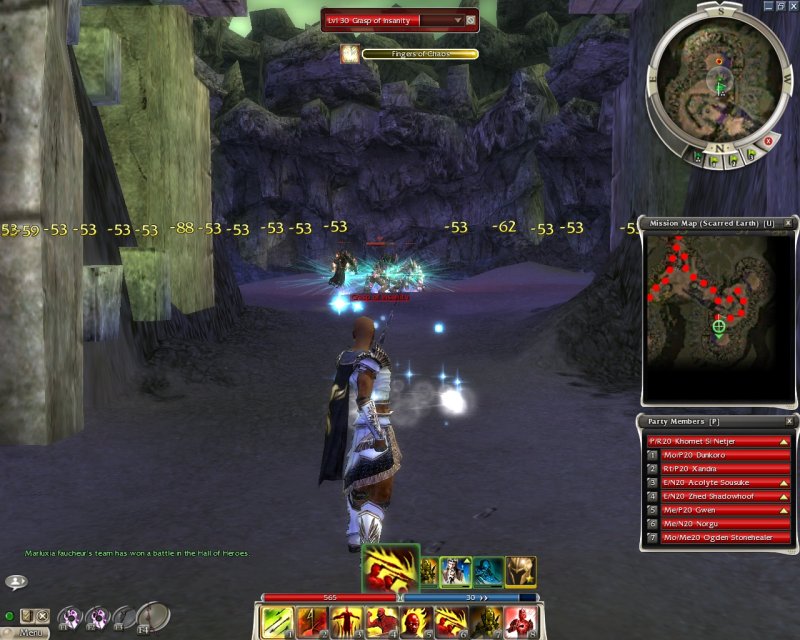 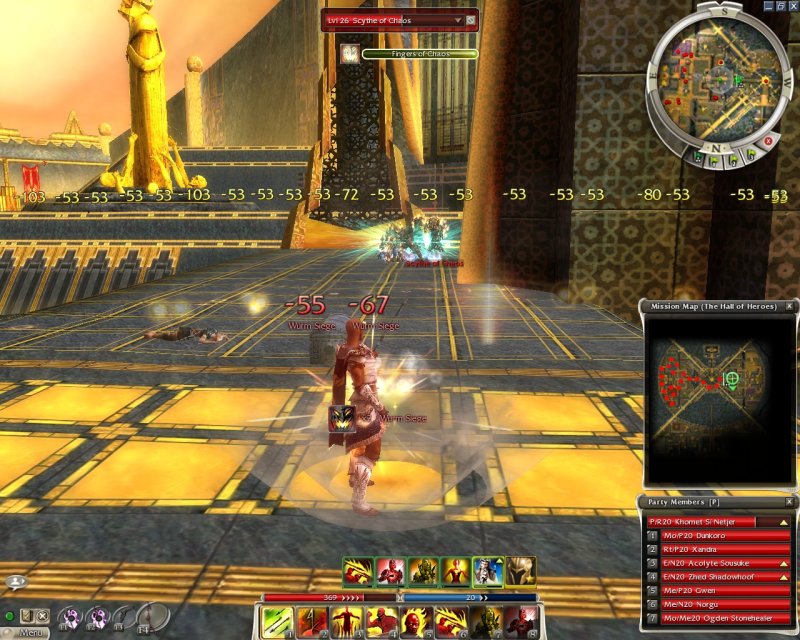 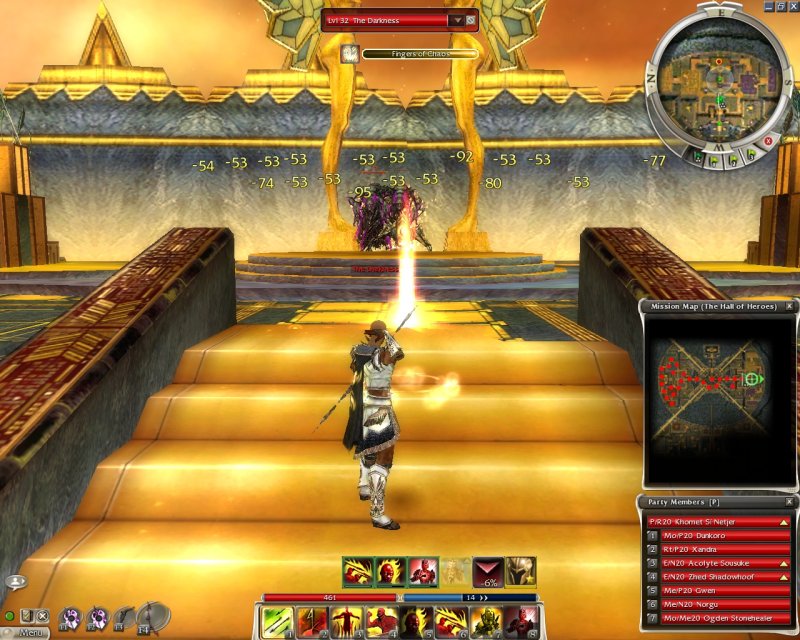 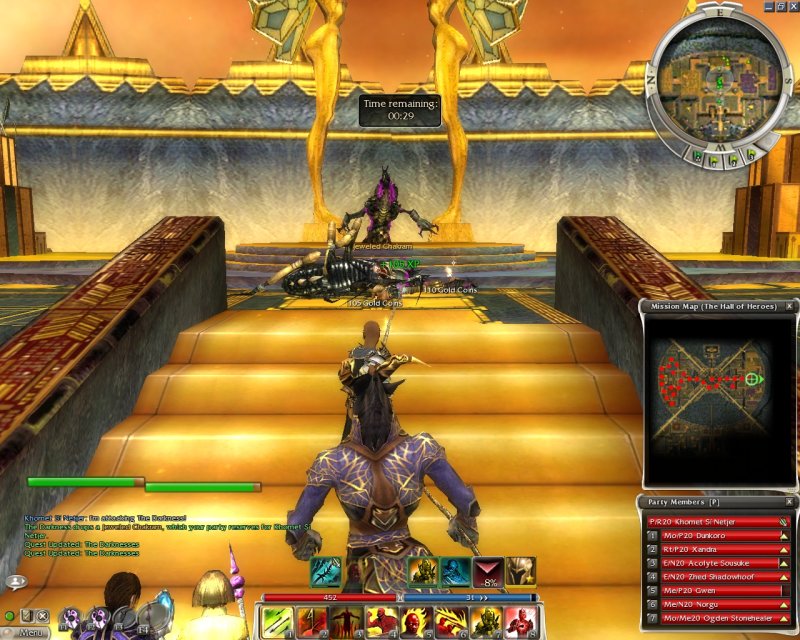 Team composition was Flameway v2; no consumables other than some DP removal. Here we see a nearly perfect shot against a perfectly balled group... this shot hit the maximum number of foes and expended every pulse of splinter weapon all at once. Notice that there are exactly twenty -53s from Splinter Weapon and six other damage numbers from Barrage. Splinter actually hits four adjacent foes instead of three with each pulse, so if you have 5 pulses of damage you get 5 x 4 = 20. Damage on each arrow is boosted by Judge's Insight. Unfortunately I stepped out of the Ebon Battle Standard of Honor when taking the shot because the foes were slightly uphill from me. EBSOH would have added another 90 points of damage (15 x 6). 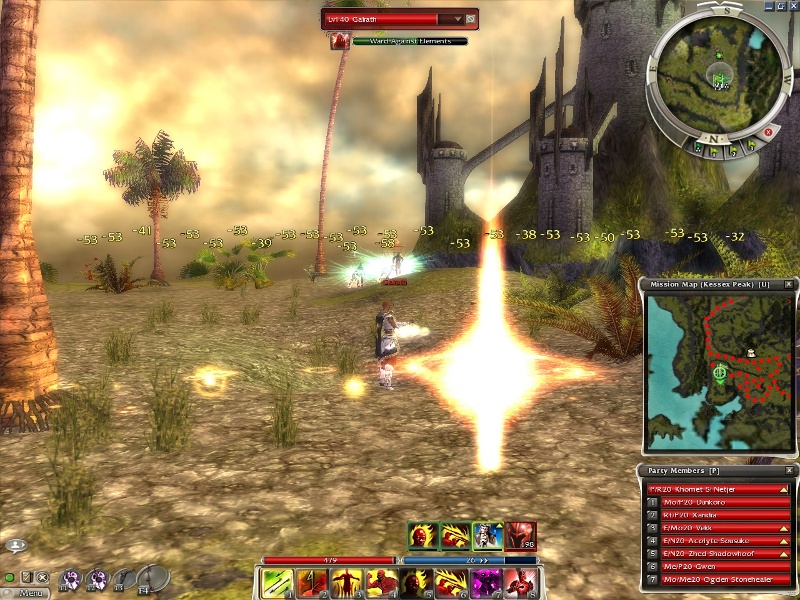 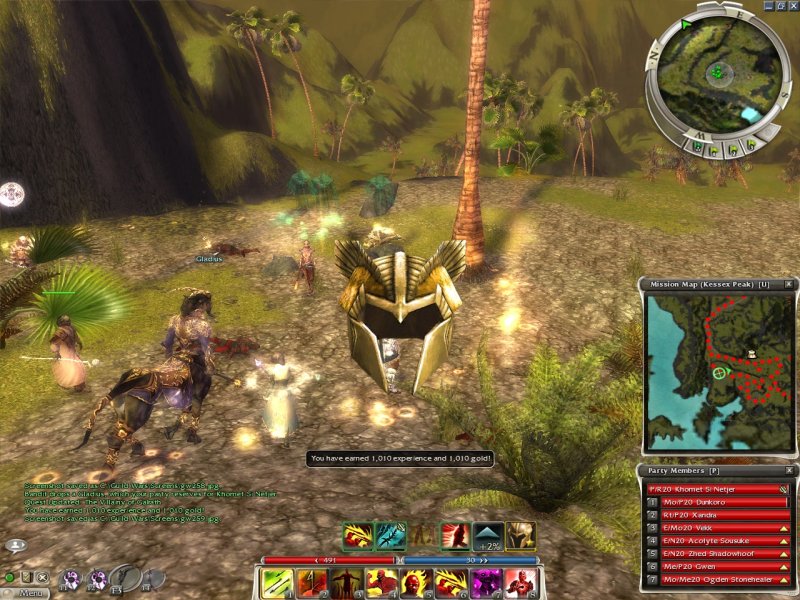 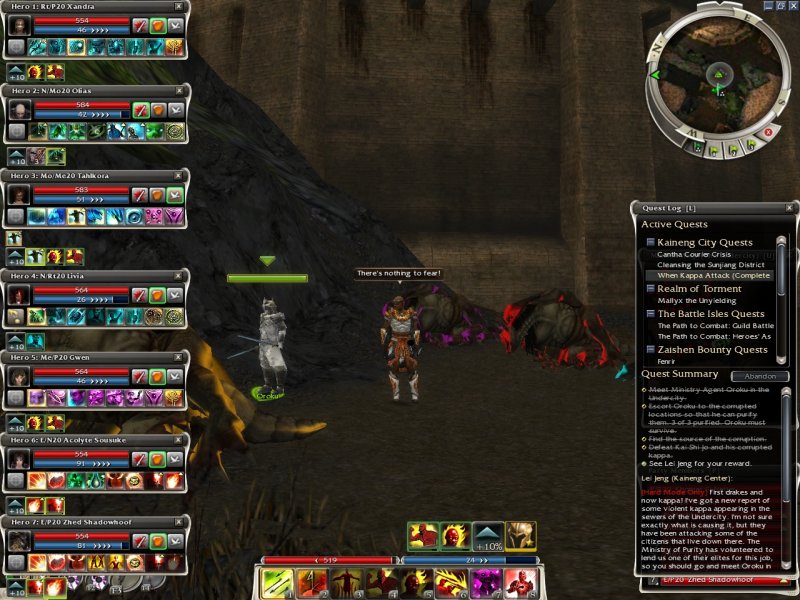