I went up against a person with deflect arrows activated, and every single one of my attacks hit (with a bow, obviously). I took a closer look and realized my bow had an icy bowstring. is it a bug that "elemental bows" seem to ignore this skill, wheras normal "piercing damage" bows take the effect? I'm testing it again, but I could use confermation on this. 00:03, 16 January 2008 (UTC)

Most likely pure luck. Same as it's happened for me quite a few times that Guardian doesn't block one single attack. It sucks when it happens, though. — Galil

Did said person attack after useing this skill? because it is a stance it doesnt have a casting time. its not uncommon for people to use it while their char is exectuting an attack thus automatically cancel it out. (70.2.104.155 07:28, 22 February 2008 (UTC))

I saw this used in TA once on a necromancer, and I thought that now with Lingering Curse necros, the high Soul Reaping attribute isn't needed much anymore, so you can spec a decent 10 into tactics for this skill, get a shield bonus, and be pretty well protected from all of the R/W Burning Arrow rangers out there now. Any thoughts on this? 71.98.170.211 04:27, 8 February 2009 (UTC) 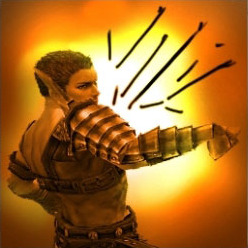 The only skill where the normal icon is better than the Beta icon?[edit]