I noticed in the general chat on chests that people here want to mention rare skins that can drop from certain chests. I don't know how you want the information listed, but I do know that some drops from these chests are fellblades, gladius, and longswords. Might also want to mention that although these weapons drop from the chests with max damage, the mods usually are not max themselves, this causing a problem since they don't use inscriptions. Djacob 18:18, 3 July 2007 (UTC)

yes. maybe we could make tables what one found in a corresponding chest by making a table similiar to the drop location tables of several item skins. —Zerpha

They are called "Chest", contain torches and look like Shiverpeak Chests. 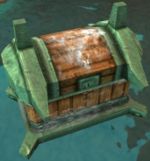