TexMod is a third-party tool that can be used to alter textures in games rendered with DirectX 9.0. For more information on TexMod and other related tools please read about graphic manipulation here.

TexMod can be downloaded here.

(This information is copied from the Readme.txt file inside the Texmod download.) 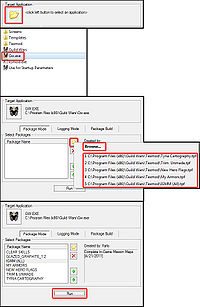 Note: When multiple mods try to change the same texture, the one that is higher on the mod list takes priority. If this mod is turned off, the texture reverts to the game default instead of the other mod(s) that would change it.

When extracting textures using TexMod, there are a variety of different file types to choose from. This table will try to show which is best for specific uses.

2 textures have been extracted, with various formats.

As seen here, the ideal filetype to use (if possible) is .dds. It has the smallest filetype which supports alpha (a.k.a transparency), and is the native texture format which Direct3D uses. This means that using .dds does not require your video card to do additional conversions to display your texture, using even less memory and bandwidth compared to the other formats. If your image editing program does not support .dds, plugins can be easily found for Photoshop, Paintshop Pro, and GIMP.

For small textures without a reflection map, the difference is negligible. While .png has a smaller file size and supports transparency, due to its lack of alpha channel it selects black as the color which denotes transparency. Because of this, you may find that .dds is preferable. Despite the slightly larger file size, it includes an alpha channel and requires no additional conversion by the video card to display the texture.

Note, that you can still include transparent .png images in your mods, where the transparency is included in the image itself, instead on a separate Alpha channel.

It is recommended to avoid .jpg format despite its low file sizes. The small size may look attractive, but this format greatly degrades the quality of the image, leading to highly noticeable imperfections in mods, while also lacking transparency features.

It is worth noting that the .dds compression format is not lossless, and can result in some quality degradation. If artifacts are rendered, be sure to save the file uncompressed. 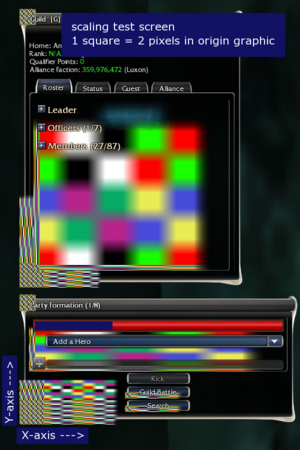 The following test results may help you when modding the extracted graphics. As you can see in the screenshot, the size of the edited graphic is not equivalent to the in-game rendered graphic. The origin graphic is scaled linear in X- and Y-axis, however not all over.

Due to the test, the scaling behavior is as follows:

Note: All pixel values refer to the origin graphic.

No. Any modifications must be run through TexMod every time, and no changes are made to any Guild Wars files.

No. TexMod only supports modification of existing textures, and can not access model data.

If they have the same mod active, then yes. Otherwise, no, only you will be able to see the changes.

Texmod currently requires at least DirectX 9 (or higher) to run. In particular, DirectX 10 and 11 are ok.

TexMod does not yet support command line switches.

Note: Most all antivirus software will detect TexMod as a "virus, backdoor, or suspicious". These are known as "false positives" and can normally be ignored AT YOUR OWN RISK. To be sure that your copy of this software is safe, verify one of the checksums in the section that follows.

Many armor/weapon reskins only work if the item is a specific color to start with.

This is a general error message used for nearly all exceptions - as TexMod is beta software, error handling isn't up to par.
However some known instances where this error may occur are:

If your anti-virus/anti-malware program uses heuristic detection, a program's ability to modify the way another program works, it might detect TexMod as a trojan. These scanners cannot tell good modifications from bad ones. TexMod is a probable false alarm, since the basis of it is to modify how a program runs by replacing textures that the program uses. To verify that you have a valid copy of TexMod, compare the checksum of your downloaded zip file or texmod.exe with the known good checksums (see bottom of page).

TexMod requires a graphics card that is fully DirectX 9 compatible in order to work. Older graphics cards do not have the ability to fully use DirectX 9. This means that some programs that require it may not function properly, including Texmod. In addition, if a new Guild Wars.exe build comes out, it will restart Guild Wars, which means that Texmod will no longer be modifying the game. If this occurs, simply close Guild Wars and re-run it via Texmod.

TexMod has not been updated in several years; you almost certainly have the latest version. There is very, very little chance that an update to Guild Wars will cause TexMod to stop working. The most common reasons that TexMod might suddenly stop working are: