Player-made Modifications, or simply mods, are alterations made to the game using third-party programs to change aspects of gameplay. Mods are traditionally a part of the gaming world and tend to be created by members of the gaming community to extend the enjoyment or accessibility of a game. Guild Wars is no exception. 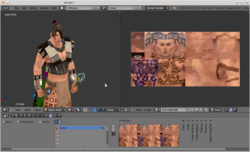 TexMod was created by RS as a modding utility originally used for “Tomb Raider 7: Legend” back in 2006. It allows to extract textures from DirectX 9 applications, and pack the altered textures into TPF files (TexMod Package File) to load those back to the graphic stream replacing the textures viewed on the screen. This allowed players to change the appearance of Lara Croft and other characters of the game. However as great as the original TexMod is, its development stopped with the actual release of it. TexMod can still be obtained from the successor webpage.

Universal Modding Engine (uMod) is an open-source version of TexMod made from scratch by Patrick Westerhoff and his team. The project is an approach to develop an open-source port of TexMod, integrating new features, and compliance with DirectX 10 and 11. While the last official release of uMod was done in August 2012 with version V2.0 Alpha (r53), the project remains in open-source where anyone can develop it further if needed. Additional features include reading from a wide variety of image formats and images compressed in zip files. Unlike its predecessor uMod can reload graphics while the game is still active and use command line parameters.

An acronym for GNU Image Manipulation Program is a free and open-source graphics editor used for image retouching and editing. The current version of GIMP works with numerous operating systems, including Linux, OS X and Microsoft Windows. GIMP has similar functionality to Photoshop, but does not emulate its user interface. Once the texture images are captured they can be altered using GIMP.

3D Ripper DX allows you to tweak the DirectX or extract images and models as they pass through. Albeit a tad overwhelming, the program can capture all the the 2D and 3D data needed and export it for editing in 3D Studio Max, Maya, and Wavefront Object file formats. Unfortunately the programmer of this project, Roman Lut, has no plans to continue development. 3D Ripper DX supports only DirectX 6.x, 8.x and 9.x applications. It may have limited functionality with DirectX 10 and 11. The program remains free to use at his homepage.

A professional free and open-source 3D computer graphics program used for creating animated films. Users import the 3D mesh obtained with the "3D Ripper DX" mentioned above. The Blender in this case is not used to change or alter the mesh but as a 3D canvas to repaint the textures. This is an advanced and time consuming method but renders the best results.

DSOAL-GW1 is a drop-in replacement for dsound.dll that emulates DirectSound's 3D positional audio and EAX effects that do not work in any version of Windows later than Windows XP. This enables players to hear Guild Wars' sound effects as originally intended for the first time in many years. Additionally, because DSOAL-GW1 is powered by openal-soft, all of openal-soft's features are available, including ambisonics for surround sound speaker configurations and HRTF for headphones. DSOAL-GW1 is a fork of DSOAL that has been modified to deal with Guild Wars' idiosyncratic approach to DirectSound buffers. DSOAL-GW1 was last updated 6/26/2021.

DXVK for guild wars is a Translation wrapper for translating DirectX 9 to Vulkan, using a fork of [1] with performance optimisations such as Asynchronous compute and Fast path algorithm. This Boosts performance or lowers power consumption, while retain compatibility with other 3rd party tools and Operating systems such as Windows XP through windows 11 and Linux.

The content in this section alter the appearance or rendering of a variety of game elements. They have been designed by players for players to download and use freely.

Mapping and how the maps are displayed.

Create and preview your own cape designs using Paint.net program.

The mods in this section alter the appearance or rendering of items and equipment.

Skill animations or the appearance of skill icons.

Additional player content that does not fall into any of the categories above.

The following quotes are from ArenaNet staff:

As a general rule of thumb, we don't mind if you do things like this to make your own playing experience more fun. Some people really like to mod, and we recognize that this can often be a valuable learning tool. When you're doing it, though, keep in mind that we ask that you don't use our content to mod other games. Please do not attempt to extract anything from your GW.dat with the intent to use it in a mod for another game or project. Also keep in mind that we can't support any changes you make.

In other words, if you try to make some changes and your game crashes, don't contact support because there really isn't anything they will be able to do for you. Make sure you have your disks handy to reinstall.

In case anyone was concerned about this reply, keep in mind that alterations that people make to their own .dat files will not affect the play experience of others. All of that important data is stored server side, so any changes that would be able to be made are purely cosmetic. For instance, if someone re-textures their sword to look like a gigantic pickle, they will be the only one to see this change. You won't start seeing people wielding pickle swords running around in random arena any time soon.

Also keep in mind that we are always interested to see what stuff you guys come up with. If you do something exceptionally cool that you feel would really benefit the community as a whole, don't be afraid to let us know about it.

To all modders: It's important to note that the parameters concerning the use of third-party programs do still apply. We cannot condone the use of such programs, and we cannot support the accounts of those who may be negatively impacted in using such programs. That's called the "If it eats your hard drive and blows up your refrigerator, don't call us" policy.

Honestly, though, as previously stated, it is unlikely that we would actively pursue or action those who use such programs in a positive manner, that is, those whose only interest is creating benign mods of our games. Keep in mind that occasionally people get creative and might bring up the use of a harmless program to attempt to mask other harmful activities. We see that with other situations, such as where they say "But I was only using an alternative OS, why was I blocked?" and we discover they are using major bot programs.

If you feel that this creates a "mixed message," then I guess we should discuss that concern. I can understand where the strict "Don't do that" is clearer than "We can't say you can do that, but we won't take action if you do choose to do it." There are some cases where it's not black and white. One example that comes to mind is the use of emulators to play Guild Wars. We develop only for the PC, but others play on other systems and that's totally ok. However, if they develop difficulties, our Support Team is not available to help them resolve those issues. So we don't prohibit the alternative, we simply decline to support it.

What I want to say above all about this matter is that if you're going to mod, have fun, but do stick with the benign and positive uses of the programs and create mods that impact the game only in ways that are fun and harmless. If there's more information to share, I will do so as soon as it becomes available to me.