I noticed that on the guild hall islands were red hanging pennants (banners).

I was on my guild hall's island (Wizard's Isle) and noticed that the banners were still red, this may be fine for PvP battles but it would be nice if these hanging pennants (banners) used your guild cape colours, emblem('s) and edge (including bottom edge pattern) - it would probably need a 128x64 texture for the hanging U then the cape hung under it. That way every guild's guild hall would show the guild emblem of the creating guild.

I also noticed that the Guild Lord on Wizard Isle was also in red armor, so further to the above it would be nice if the metal parts of his armor took their colour from the (metalic) guild emblem and the material (fabric) parts the cape colour.

Now the Guild Lord and all guild NPC's (with the exception of the Xunlai, Xunlai Tournament and Balthazar Priest NPC's as they are supposed to be hired guests) should really be wearing the guild's cape. (This also includes the guild hall Henchmen NPC's)

Heya Longshot! This isn't anything I'd be able to give my opinions on, but I can definitely pass it along to Izzy and the other folks that work on the Guild stuff. Thanks for pointing it out :) -- Emily Diehl (talk) 19:37, 3 October 2007 (UTC)

The following screenshots are ingame ones, however the "Guild Hall - Guild Banner" one required a texture change via TexMod, however it would be preferable if this was implemented ingame. -- Longshot Hammerhand 17:55, 24 January 2009 (UTC) 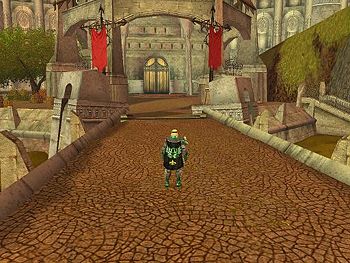 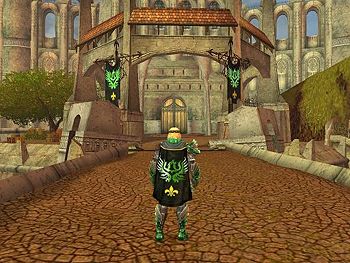