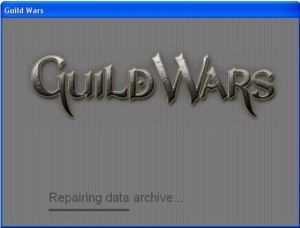 The data archive being repaired.

"Repairing data archive" is the technical phrase used when the game client determines that there is a problem with the game's data file and attempts to fix it by rebuilding the database. This takes anywhere from ten to fifteen minutes, depending on the speed of your computer's hard drive and CPU.

The message only appears when there is an issue with the files on your computer, but the cause is rarely obvious. Persistent recurrence of the message usually points to a root cause that can be addressed:

These issues can be resolved by cleaning up the hard drive: e.g. defragmentation, clearing out unused files, or emptying the recycle bin. Alternatively, you can reinstall the game or replace the data file (delete it and run the game using the game using the -image switch); either of these methods of replacing gw.dat can take several hours or more.

Viruses, trojans, and other malware can cause similar symptoms. You will notice that other programs are affected or that your internet connection speeds are throttled. Be sure to run anti-malware software and run periodic full system checks.

Hardware issues are likely to affect Guild Wars sooner than other programs because of the large size of the data file. If your computer has a hardware problem, you will typically see other symptoms, as noted below. Resolving such problems are beyond the scope of this wiki.