"Everybody to the limit!" from Homestar Runner[edit]

Definitely is, especially given the number of other homestar runner references. -Auron 23:55, 21 November 2007 (UTC)

Wait, why doesn't this have quotation marks around it? -- Halogod35

Apparently, the wiki commmunity does, or anyone else who likes this game. Also, Chaka Khan's "Through the Fire" comes to mind with this skill.--Ipsen 22:13, 6 March 2010 (UTC)

Is this really true? I have never seen that, I'm even Echo spamming it and still nothing. -~=Ϛρѧякγ

The first time I saw it was in RA, playing backbreaker. After that, I spent a good while (nearly an hour) echo spamming it in an attempt to replicate it; I was successful once, but absentmindedly used the shout again before taking a screenshot (it's easy to get careless after 12323ing over and over for an hour) and covered it with the usual speech bubble.
I'm not going to attempt to echo chain it again, mostly because it's very, very boring. But I DO run To The Limit on my Paragon in RA, and I'd take the screenshot if it came up again and I had the presence of mind to do so.
In any case, in several hundred uses of the skill, I've only seen that alternate text twice; it's hardly a common occurrence. 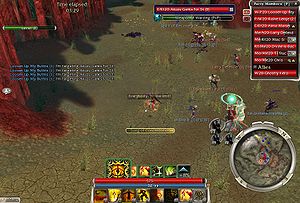 Little faded since I didn't take it right away, but still easily visible.

This just happened in Thunderhead Keep... it was Jalis whom did it, i saw it just after the bubble was about to disappear. Quite funny actually... Spotina Talk 13:44, 31 July 2010 (UTC)