There's another article titled "Activation Time" that has more accurate information. erm, I don't know how to do the whole redirecting thingy... (Terra Xin 09:55, 30 April 2007 (EDT))

I want to point out that if the article naming policy passes the articles will have to be switched around. Just so if it passes and I forget to switch it later on, someone else will see the note and maybe do it for me. - BeX 10:39, 30 April 2007 (EDT)

"The activation lag is zero for queued skills, they activate as soon as the previous skill in the queue activated (and the aftercast delay for that skill passed)." Huh? It sounds like the writer was expecting (thanks to another game, probably) an additional delay between skill activations other than aftercast. Or maybe I've forgotten all game mechanics... --

If you decrease your casting time to a quarter of what it would've been - let's say via MoR and Mindbender - and then use a 0.25 second skill your character won't perform the casting move, not even really fast. Ɲoɕʈɋɽɕɧ 04:00, 6 December 2008 (UTC)

I always thought the minimum cast time you could attain was .25 seconds....though I could be wrong. 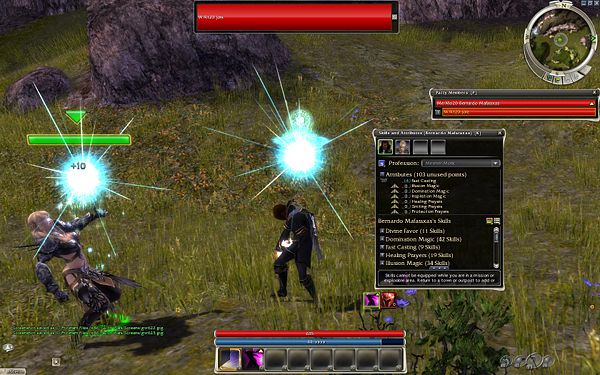 The chances of interrupting it go way up if you operate under the assumption the caster is spamming it, or will use it immediately after another skill; you can time the interrupt relative to aftercast to have it land immediately when they would start casting. --

how come air of superiority....[edit]

I would like to suggest to add an explanation of some particular, but important details about activation. I can't do this because don't know exactly how they do work, only have some guesses...

1. Need to mention the progress bar which shows an activation process of long-activated skills. It seems for me, that time threshold is about 2 sec. For example, Ray of Judgment has 2 sec activation and this bar is usually visible, but when HCT in staff/wand is triggered, activation decreases to 1 sec and the bar isn't shown. However, the real behaviour of bar between 1 and 2 sec is unclear because need to decrease the activation time by small values. Maybe someone can do such test with Mesmer, increasing Fast Casting step-by-step.

2. "Attempting to move during a long activation time... will cancel the skill" (citation from Fizzle). But it's unclear, which exact time is counted as long. I suppose, also basing on my practice, a long time is a time when a progress bar is shown. For example, Ray of Judgment can be cancelled by moving when bar is visible and can't be in the case of HCT, without bar. Also would be well to confirm this and reflect in article.

3. "Attempting to activate a targeted skill while the target is out of range will cause you to follow the target...". The problem is, not all targeted skills behave according to this rule. For example, shout "You Move Like a Dwarf!" can't be activated if target is out of range: character doesn't attempt to move to a target (error message is shown instead). Whether this is a common feature of targeted shouts, or skills with zero activation, or maybe some other group, I don't know yet. --Slavic 18:15, 29 June 2009 (UTC)

I made them. Problems? — Raine Valen

Not sure if this is true or not, but i did some testing and apparently :

Now either there is a cap on activation time, or whether activation time increasing/decreasing cant be stacked. I don't see this mentioned in the article so it should be added as a note. --The preceding unsigned comment was added by 24.239.166.194 (talk • contribs) at 09:29, 30 June 2011 (UTC).

I've overhauled the article as follows:

I think the article could probably use one more major edit and it's probably missing a couple of key notes (e.g. with regard to specific caps on activation times). — Tennessee Ernie Ford (TEF) 18:17, 30 June 2011 (UTC)

To corroborate this further I have also noticed that after using an attack with activation time the follow-up auto attack is faster  ; leading me to believe only skills with activation times are special and can give IAS effects217.122.183.107 14:34, 28 February 2012 (UTC)