I heard that this boss has a Black Widow for a pet. Using ye olde pet stealing trick, one can simply take it (worked on Salke's tiger, at least). I'm just curious if anyone knows what level it is, since this boss is pretty far from Rata. Is it 15 like the rest? And does it change in hard mode? - Stranger Without an Account 01:11, 8 October 2007 (UTC)

Auron Bushi: good question, there is no map of her loacation posted so i have not yet been able to get a plan of attack on her. i hope Anet doesn't nerf the boss pet stealing trick because its hard as hell to evolve and elder pet in pve and all boss pets are elder right off the back. same reason why i didnt get a spider in the UW random evolution spawn isnt my deal its elder or nothing.

Auron bushi: ok she does not activate till a human player gets close to here. she does have to actually tame the spder with a skill. thus my conclussion is that it can be staken from her... her charm animal cast significantly faster though 1/4 a second so there would have to be a major distracton at her location the moment you get into range... might was so and so anyone? --The preceding unsigned comment was added by User:70.2.0.9 (talk).

Maybe u can get the spider by that but in my experience I have not seen her use Charm Animal --The preceding unsigned comment was added by User:Blobber (talk).

It seems from her skill list on the actual page that she does not have Charm Animal with her. Could we get further confirmation? I follow that if she has a pet she must have charm animal but its clearly not in her skill listings.--Alex 10:18, 14 May 2008 (UTC)

I have tried this myself, it doesn't work unfortunatley, I killed her and all her posse, leaving it Alive, went to Charm it but it said that it was a Invalid Target. Sorry to dissapoint you guys Aerie swiftarrow 00:25, 1 June 2008 (UTC)

Having made my way to Arachnis Haunt, I killed her on the way in, and it was listed as 'Pet - Elder Black Widow'. I completed Scrambled Reinforcements, and was taken back to the res shrine to collect the reward. When I killed her again, it was only listed as 'Elder Black Widow'. Didn't have charm animal on me, and I already have the pet I want, so I didn't try it, but..... Magua 10:51, 1 June 2008 (UTC)

I tried again, went out killed her etc, etc, I have yet to try the Quest, but have a Screenie of the Pet status [[Image:Gw006.jpg]] Aerie 21:58, 9 September 2008 (UTC) can anyoen help me charm this one i can clear it but need a valid stageing point and i know how to do this haveign dont skalkes tigert the tigers form the yeti in pongmei the reeflurker elder in boreas i just need a little help--Trapper randy 02:00, 22 October 2008 (UTC)randy

At first I thought it was just my bugged computer. then I looked more closely. 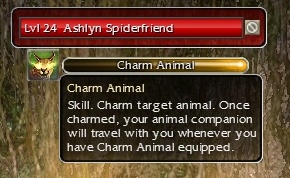 Its a special monster skill to charm pets without a recharge or cost. Thus she can charm her pet and have no animal skill listed in skills box with a signet of capture. Problem solved. I also conclude that a runner to Oola's Lab could then enter, exit and flag heroes to her to kill her mob. ( Would need to be non aoe henchmen ) Then you saunter in and go capture the pet.

I also noticed that occasionally she does not actually charm her pet. 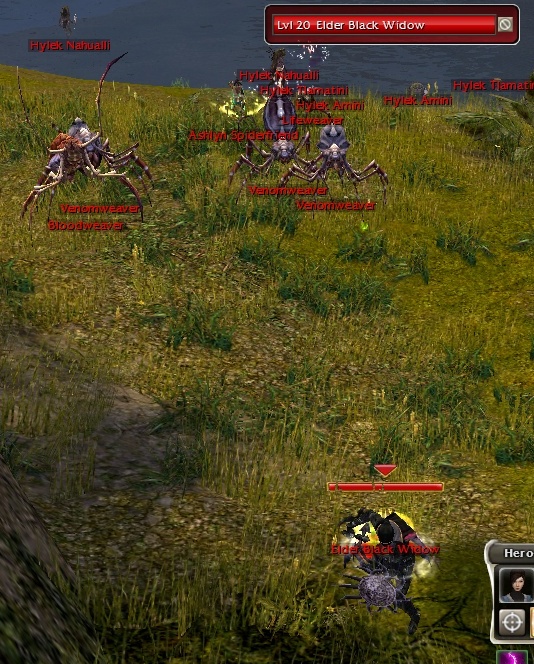 Her pet seems to be untamed by Ashlyn if it appears as level 20. It was still NM.--File:User Chieftain Alex Chieftain Signature.pngChieftain Alex 08:27, 22 October 2008 (UTC)

The version she refuses to charm is untargetable by charm animal ( i.e. when the pet is level 20 ). I have yet to try using henchmen fighting from Oola's lab ( without humans ) and capturing after. --File:User Chieftain Alex Chieftain Signature.pngChieftain Alex 21:17, 23 October 2008 (UTC)

Using henchies and heroes from Oola's lab, i walked over to where i had seen her previously, checked where she would spawn, and then rezoned into Oola's lab. After that, i went back to that area again, and having failed to cap the spider because i walked into (what i though) was the combat between her mob and my heroes, and thus she had capped the spider, and she was at the same spawn point, and then i verified that she doesn't patrol. My final try, i swept my heroes into many places, where had she been patroling, they should've engaged her. I died so i could look through their visions, and she was no where to be seen. Got rezzed, went back, and lo and behold, there she was, spider and all. She seems to spawn, and capture animal, right when i approach her, so i believe that it is futile to attmept. Tearh 00:36, 7 January 2010 (UTC)

She's probably ascended if she's been to the Underworld and tamed a spider. Judging by the model used, she's probably Tyrian, and thus went through the Crystal Desert. Maybe she met Turai Ossa and Glint too. Manifold 04:27, 13 December 2009 (UTC)