I feel sexy when I shoot laser beams out of my finger.

Poorly. You can't maintain this on enough people in your party to make this effective, and it would only add on a maximum of 3 seconds. This is really not needed.--Fallen (talk) 03:28, 12 June 2008 (UTC)

You'd have to keep recasting it on people. Casting it would cut into adrenaline gain, so you'd end up using SY! less, which kinda negates some of the benefit of using this skill in the first place. --Spura 10:20, 12 June 2008 (UTC)

What skill the Paragon have that mixed with this? Or is just one of those another skill that would have been perfect for another class that they have wrongly putted on the wrong attribute?--ShadowFog 22:43, 15 August 2008 (UTC) 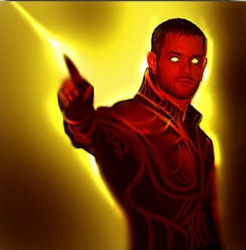 Is this izzy again on the picture? ~ Kurd

Shouts where you won't suspect[edit]

Enduring Harmony is pretty cool when playing as a beast mastery as most buffs you apply to your pet are shouts. In this way you can keep both Otyugh's Cry and Predatory Bond up. Some shouts that have already ridiculous long lasting times get even better. Noctarch 23:41, 3 July 2008 (UTC)

This skill was great on heroes maintaining FGJ on themselves, now they cast it on anyone, making it highly ineffective.

Removed the note 'Synergy with "For Great Justice!" to extend its duration from 20 to 30 seconds, which can prove useful for adrenaline skills like Dragon Slash (in PvE).' As this is not synergy this is just using the skill correctly. I changed this to "This skill can help warriors to continuously spam the skill "Dragon Slash" in conjunction with "For Great Justice!" in pve." --The preceding unsigned comment was added by User:Zylo16 (talk).

Without any context: it is entirely possible both claims are accurate. Skills that have been unlocked previously are offered at any skill trainer of the appropriate campaign. Baram is not a skill trainer who offers all Nightfall (and core) skills by default. Enduring Harmony could be a skill offered only by Dau or Zendeht, but no one has been able to verify it. Then again, the content for all three of these articles has been rather stagnant about this information, so maybe Biggus has simply overlooked this particular skill. I would confirm, but I have unlocked all skills. - Infinite - talk 16:24, 17 September 2013 (UTC)