the code in here uses the first out of the three ciphering methods, and contain this text. you can use the decoder over and over, and you would not lose the page, but after talking again with the captain, she took the decoder with the plans in it, and sent my party to center north of dragon's gullet, Which has now level 20 charr, not sure of what kind. they dont drop any kind of charr carvings. you can subdue and mount a siege devourer pretty early, and two towards the end. after completing you are sent back to longeye's. you can't do it again, at least not without new battle plans. unknown:

Most of those char are low level tho, there was a huge hoard of level 8's =P Also there is a mountable siege devourer in the map which makes it even easier and quicker to kill. Me'n my friend did it in about half an hour, mebbe a bit more because of idle wandering. I thought it was kinda fun, regardless 69.235.26.201 03:41, 30 September 2007 (UTC)

Just did this mission on Normal Mode, even though i have R8 vanguard title, odd thing was i didnt get any Vanguard points, not even the mission reward ( 1000 vanguard points) Saga [DOJO] 04:44, 5 January 2010 (UTC)

Okay, so my Chinese guildie asks me "Wishes to explore Charr Encrypted Battle Plans?", so me and the leader join up with her and we do this in 7 minutes, wow. I mean, really. "Special" Ops???, No. This was really disappointing. If I'm going to go through the trouble of encrypting something just to read it, I shouldn't be able todo the quest in 7 minutes, slaughtering lvl 8 Charr.--Ʀєʟʟɑ 04:16, 29 April 2008 (UTC)

Wrong. This map is a piece of the current Dragon's Glitch map. No additional land has been added. So... you didn't explore all of Dragon's Gullet if you think this is extra land. :)

I just did this mini-mission and was ported near the zone-in to Dragon's Gullet from Flame Temple Corridor. I couldn't reach the area shown in the map on the page as it was blocked off by debris on the road. I ended up circling around the north-western lake until killing enough to complete the objective.

I suppose there might actually be multiple closed off areas where you can randomly start from, maybe one for each lake.

I also ran across several Charr Stalker Lords and a Charr Mind Lord, although I never saw a Titan. Maybe The Titan Source affects the spawns as I had that quest active.

What region does the journal log this quest under? I don't have access to the Charr Homelands yet, so cannot check myself.

I got a purple Cane with no mods at all from a chest in this mission. That doesn't normally happen with Ascalonian Chests does it? --

I was in the northeast corner of the map doing the quest and had gotten to the last group. It looked easier to hit them from the side than head on, so I went south to look. There was some junk in the road but I didn't think anything of it at the time. After passing it I realized that the route I wanted to take was blocked so I decided head on would have to do. It was then that I realized I couldn't get back. Part of my party was on my side of the blockage, the rest on the other, including my pet. I tried all kinds of ways but could not get back and could not finish the quest. See image here: Image:Special_ops_gullet_map_bug.jpg Zarenda Mal 09:03, 27 April 2012 (UTC) 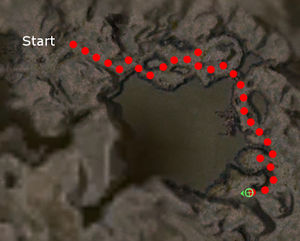 Starting in the centre of the northern edge.