He spawned with a fiery dragon sword for me idk why...

I often think this to be the most bugged boss in the game:

Occasionally does not spawn
Sometimes with wrong weapons
Sometimes called "Tiger" instead. --

Are you sure a Tiger just didn't get aggroed from AoE after you engaged? And the failure to spawn may be based on his abscence during Stolen Eggs, the primary quest. ~ marcdarc 05:33, 21 November 2008 (UTC) 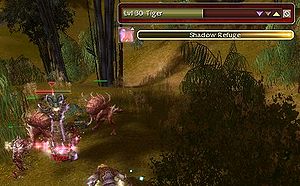 Common bug, not exclusive to this creature. -- Arduin

guy and his little mob get owned by that tree elementalist hardcore. Removing the tag on the notes about it being observed...yeah we will take your word for it--Justice 08:49, 8 June 2009 (UTC)

He does indeed fail. I killed him twice today, the first time I got him down to half health before he finally stopped pathing to turn around and attack my group. Second time he didn't even stop pathing at all, killed him without anyone taking damage. Borked boss is borked. --ᴥ GreyGhost ᴥ 01:40, 3 February 2010 (UTC)