From Guild Wars Wiki
Jump to navigationJump to search
Warning: Key elements of this terminology-related article are incomplete. You can help the Guild Wars Wiki by expanding it. 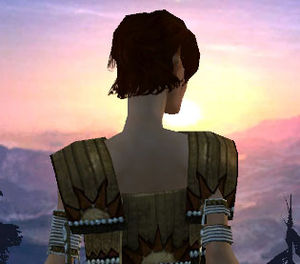 Example of clipping happening when wearing Sunspear armor. The character's right arm appears through the armor.

Clipping is a graphical bug that occurs with one or more 3D models within the game such as items, armor, or weapons. The visual issue is evident when one of the models to appear to pass or "clip" through another. The bug is caused by a lack of coded collisions between the two models. This means they do not interact with one another physically inside the game. Clipping can also occur between player models and the environment; it is frequently seen during a portal jump as the game world beyond portals is not meant to be accessed and so is less well designed. An example of this would be the fairly common occurrence of passing through seemingly closed doors and other normally solid terrain. During the time the player model and the terrain model occupy the same virtual space, clipping is occurring.