I have been playing Alliance Battles since my beginning months of play Guild Wars(43 months). Even still today I actively AB and even make team builds for it. I know AB mechanics from inside and out, from skill usage of NPCs (correct order, too advance tactics. The reason why AB is still actively played and one of the most active arenas is because of the userbase itself. The AB community pools from both sides of the spectrum, the PvEr's, low-end arena PvPers and high ranked/hgih-tier PvPers. Although looked down upon by many high ranked PvPers, AB is an active, flourished arena. I believe that AB was meant to be tactical PvP, but failed to do so because of its player-base. The suggestions I will make will fix that so AB can still be more tactical, but can still be playable by new users to PvP or GW in general.

The intervals for map changes is three hours. This I believe should be changed to no more than two hours, maybe even less. Promote map changes in hopes of different maps and playstyles. To judge wheter the map goes into deeper kurzick or deeper luxon should be chosen by a point system. Look at this graph. 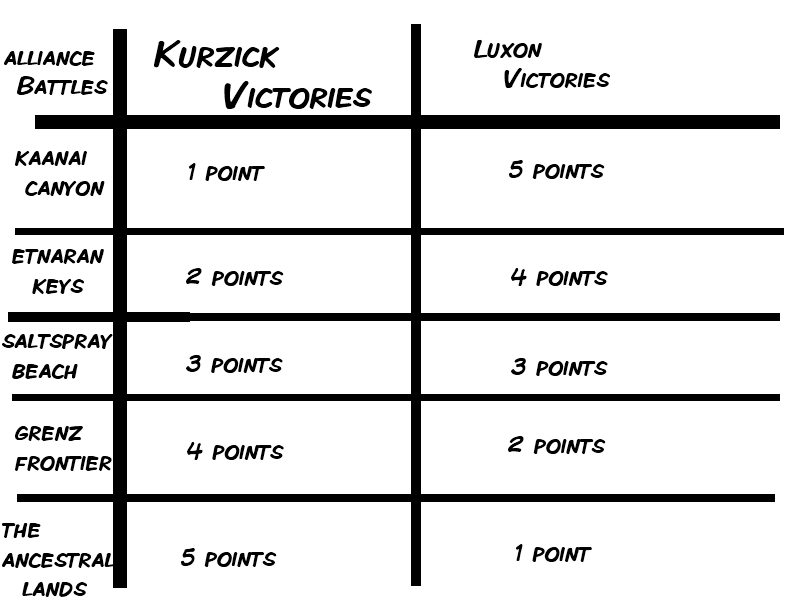 As you can see there is a point system for both kurzick and luxons depending on the maps. Along with a one hour interval change, the change should include a point system to help judge which map will be next. Doing it this way will recommend more neutral or mid-kurz/lux maps rather than the deep lux/kurz maps.

The NPCs are in DESPERATE need for strong skill bars, instead of 4-5 skills I suggest a change of a strict 6 Faction and Core skill bar, making it harder for both sides to cap and forcing team and tactical play.

All of these NPC builds are indeed different. Unlike most mindless unsynergetic builds, these will force the player to play an effective build, making them actually able to kill NPCs in order to cap. The Elite NPCs are made to give the team who has the NPC an advantage over other teams they fight, either giving them another frontliner to pump damage, shutdown or snare enemies; where the old NPCs were just damage shields and were hardly worth bringing. Having said that, the Elite NPC bar is also made to help defend the cap shrine just like normal ones, this is to help cater to what teams would prefer. This also prevents from solo capping to occur, instead as stated earlier, it promotes teamplay.

Both killing and capping can win an AB match, however most teams are more leanent to cap rather than to kill. I have won many matches just from killing alone, instead of capping. (Pure killing, not relying on other teams capping) One team can stop a whole Luxon/Kurzick process of capping just from killing a team, but whenever this happens, no benefit will come for the opposite faction for the team that killed the team. ArenaNet should change the points for killing someone from 3 to 10.

One of the reason to why the Faction-SCs exist is because of how unproductive JQ/FA, AB is compared to it. Most players who now get their title either DTSC or MQSC depending on which faction. Along with fixing DTSC/MQSC Alliance Battles should get a higher reward. Doubling the faction gain of what we have right now will work. To promote more gameplay in Alliance Battle, I suggest a ladder system (like Raine Valen). See here for proposed idea: Feedback:User/Raine Valen/Improve Alliance Battles: Matchmaking and Handicaps