This page is an archive. The contents have been moved from another page for reference purposes only, and should be preserved in their current form. Discussion on this page is not current. Any additions you make will probably not be read. The current version of this page can be found at Guild Wars Wiki:Reporting wiki bugs.

As this server problem is still around from time to time, and the server team is not really willing to disable the protection, but rather wants to whitelist all problems individually, I'm starting a collection of those errors now. This could lead to two possible outcomes; either we can completely whitelist all situations in which the Bad Input appears, or we collect that many cases that they accept that it's impossible to whitelist every MediaWiki operation for it.

The Bad Input error appears when you are sending a request, which gets blocked by the server. You can easily spot it, as it's basically a blank page with some text and the header “Bad Input | Problème de saisie | Problem bei der Eingabe”. If you notice such a case, please post below (in the “New reports” section with as detailed reproduction steps as possible. Please also keep the discussion in this topic to a minimum, as it's primarily there to collect the issues. Thank you. poke | talk 21:23, 4 August 2011 (UTC)

Error is "Could not open socket" - confirmed on multiple machines and networks.

(Reset indent) Hi everyone. First of all on the oversight on this bug. We think we've identified the culprit and we'll be applying a fix next week. I'll keep you updated about this as soon as I have more details. Thanks. --Stephane Lo Presti talk 20:06, 7 December 2012 (UTC)

About 20 spam accounts per day compared with 40 per day before installation of captcha isn't awful, but I'd love to know what other wikis use to deter the creation of spam accounts.. (fyi about 35 spam accounts created per day on gw2wiki.. perhaps to do with higher volume of users on gw2w.) Chieftain Alex 08:54, 21 December 2012 (UTC)

If I'm not mistaken, Wikipedia has the same Captcha in place. Let us know if this volume of spammers warrants looking into more protection. --Stephane Lo Presti talk 17:09, 21 December 2012 (UTC)

Buttons and text boxes not appearing

There is an issue with <createbox>. Buttons and text boxes, such as the "I agree" button and the text box to enter your username at Feedback:Getting started#Step two: Create your userpage, do not appear. Most likely another issue caused by the 25 October wiki update, since no new feedback userpages (excluding suggestion pages) have been created since 22 October. Another example is the text box missing from Template:Feedback user createsuggestion. --Silver Edge 23:12, 17 December 2012 (UTC)

I'd not noticed it before, but apparently there is another dead create box on MediaWiki:Noarticletext for guild pages. I guess its probably because 99% of guildspace editors go directly for the edit version rather than to the non-edit version at Guild:Example Broken Create Box. -Chieftain Alex 21:56, 29 January 2013 (UTC)
^Would probably work much better on MediaWiki:Newarticletext. Chieftain Alex 22:03, 29 January 2013 (UTC)

Hi, we didn't have the time to look into that issue as the initial investigation revealed no easy fix. We'll be taking a look at extension versions to see if this is the issue. --Stephane Lo Presti talk 19:19, 9 May 2013 (UTC)

(Reset indent) Update: we pushed a newer version and it fixed the issue. Let us know if you see any other issue related to this. Thanks. --Stephane Lo Presti talk 23:09, 9 May 2013 (UTC)

Variables extension and the compatability with DynamicPageListing extension

Since some secret/stealth update to the variables extension during early January/late December, we've lost the ability to use dpl to define variables as the output. As a result we've used a work-around on two of the affected pages - using an alternative part of the DynamicPageListing extension, but we'd really like for this to be fixed. Chieftain Alex 13:52, 26 January 2013 (UTC)

Hi, we indeed made an undocumented change, thinking it wouldn't bring too much pain accross all wikis and we're sorry that it did cause some trouble on the GWW. We've added this to the list of things to fix. Thanks for your report. --Stephane Lo Presti talk 21:47, 28 January 2013 (UTC)

its far more likely that you're using a browser that doesn't update unless you force it to, e.g. firefox is set to use a cached version of a page by default instead of fetching a fresh version. -Chieftain Alex 10:30, 27 January 2013 (UTC)

If you can provide us with precise evidence of this behaviour from the viewpoint of your client, it would be useful. It's still possible that there are delays but we haven't seen big issues with this on our logs. --Stephane Lo Presti talk 21:47, 28 January 2013 (UTC)

Your IP address has been automatically blocked 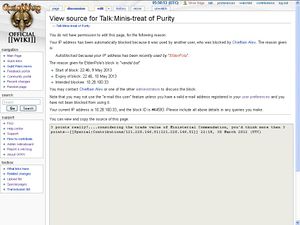 Ever since the 8 May wiki update I keep getting the window in the screenshot I posted to the right. That isn't my IP address. I have to return to the previous page and try again (sometimes several times) to save the page/edit. It's similar to the bug reported at Guild Wars Wiki:Reporting wiki bugs/archive 10#Showing up as another IP in April 2009. --Silver Edge 05:09, 10 May 2013 (UTC)

We've made a configuration change that we hope will fix this. Are you still experiencing the issue? --Stephane Lo Presti talk 18:07, 10 May 2013 (UTC)

It seems after the 8 May wiki update, redirects on image pages no longer function. E.g. clicking on this warrior icon

While its not a fix, we can add the image link parameter to {{Profession icon sizes}} to reduce the effects of this. (I think this is an unavoidable effect of upgrading unless we implement the hack from mediawikiwiki:Help talk:Redirects#Redirecting images - hack was for an old version though) -Chieftain Alex 09:20, 21 May 2013 (UTC)

Hmm, it seems that my fix didn’t make it through on patch day. Usually what you see now is intended MediaWiki behavior. File description pages should not redirect outside the file namespace so the contribution information is not hidden. Because were were used to have this working (since the very beginning), I have regularly provided a patch to restore the original behavior and make this work. I’ll talk to Stephane later and see if we can get the fix applied again (it actually should have been applied). poke | talk 09:50, 21 May 2013 (UTC)

"08:25, 25 May 2013 Abuse filter (Talk | contribs | block) blocked Stani23hb0 (Talk | contribs) with an expiry time of 3ndefinite (account creation disabled)"
Theres a bug in that it should say "indefinite" (or perhaps just "infinite" since thats what it is..), but it says "3ndefinite". (I take it increasing filter block length was deliberate - the summary seems to be a combination of 3 days+ indefinite) -Chieftain Alex 11:09, 25 May 2013 (UTC)

This page is an archive. The contents have been moved from another page for reference purposes only, and should be preserved in their current form. Discussion on this page is not current. Any additions you make will probably not be read. The current version of this page can be found at Guild Wars Wiki:Reporting wiki bugs.