This article is about the profession. For the Guild Wars Beyond content, see War in Kryta. 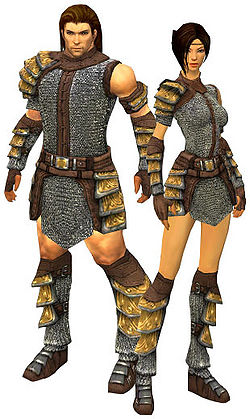 Warriors rely on stout hearts, brute strength, and melee weapons to subdue their enemies and protect their allies. They generally disdain long-range warfare, preferring instead to charge directly into the fray swinging their weapon of choice. They can take a beating unlike anyone else. Warriors are equally comfortable wielding axe, hammer, or sword, though many choose to master one weapon over all others. Many Warrior skills require adrenaline, which builds up during combat to enable those skills, and usually results in major damage. Defensive tactics help the Warrior to avoid damage and protect allies, but Strength is the Warrior’s biggest asset, allowing this hero to do more damage with every attack.

The mightiest of mighty, the bravest of the brave, the Warrior is the master of melee combat and heavy armor.

Strength increases the armor penetration of your attack skills by 1% per attribute level. Strength also improves the effectiveness of skills that keep you alive, and those that inflict damage on your opponents.

Improve Axe Mastery to increase basic axe damage, your chance to inflict a critical hit when using an axe and damage dealt by axe skills.

Hammer Mastery increases basic hammer damage, your chance to inflict a critical hit when using a hammer and damage dealt by hammer skills.

Swordsmanship increases basic sword damage, your chance to inflict a critical hit when using a sword and damage dealt by sword skills.

Tactics improves Shouts and Stances that give you and your party an advantage in battle.