This article is about the Assassin profession. For the Bonus Mission Pack NPC, see Assassin (The Tengu Accords). 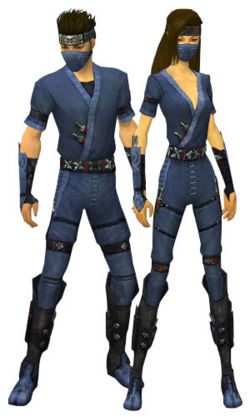 The Assassin walks the shadows, a deadly viper ready to strike at the heart when the enemy least expects it, nowhere and everywhere all at once. Assassins are masters of their chosen weapon, the dagger, and are expert at inflicting Critical Strikes that cause massive damage. The Assassin is trained to efficiently link attacks together in a chain that does not give the enemy a chance to hit back. They have mastered the ability to move as shadows—Assassins wear only lightweight armor and prefer to avoid damage by not being there when the enemy’s strike lands. Their other magical skills include Hexes that lower the target’s defenses and protect the Assassin from harm.

A swift, silent master of shadows, daggers, and death. The Assassin can chain together increasingly deadly strikes that target a foe's critical areas, killing quickly and efficiently.

The Assassin, called Tahkayun in Old Canthan, is a profession that is unique to Cantha which is looked down upon by many individuals. They are viewed as simple mercenaries or coldblooded killers, and while some are like that, the Assassins on a whole are not. Similar to the Canthan view of Rangers, which protect the balance in nature, the Assassins' purpose is to protect the balance in society, taking out justice against those who view themselves above the laws. Because of this, many Assassins take their job very seriously.

Despite this overarching purpose, some Assassins are hired simply to eliminate a rival of their employer. Most Assassins answer to an employer - be it a noble, a guild leader, or the emperor himself. An Assassin without one is referred to as a Mo Zing. Originally, most Assassins worked for a single client but as time moved on, and as the demand for Assassins rose, they began to organize themselves into guilds and now work for multiple clients; those who do work for a single employer now often work for the highest of Canthan nobility.

Assassins are swift melee strikers who are meant to get in and get out, inflicting massive damage quickly with multiple hits. They are masters of the shadows and blade, allowing them to move quickly to strike.

Increasing the Dagger Mastery attribute boosts the damage the Assassin inflicts with daggers and the chance to land a critical hit with a dagger. Many skills, especially dagger attack skills, become more effective with increased Dagger Mastery. This attribute also improves your chance of performing a Double Attack and striking with both daggers at once.

Increase the Deadly Arts attribute to improve the duration and effectiveness of Hexes and other skills that make a single enemy vulnerable to the Assassin’s strikes and many half range spells.

Put points into the Shadow Arts attribute to improve skills that boost the Assassin’s defenses and allow instantaneous shadow movement. Also keeping them alive longer, and giving them a heal in the process.