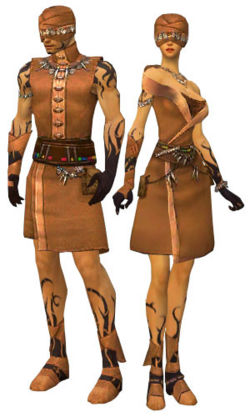 Ritualists channel other-worldly energies that summon allies from the void and employ mystic binding rituals that bend those allies to the Ritualist's will. They hood their eyes to better commune with spirits that grant great power and protection to Ritualists and their comrades. The energy they channel drives Ritualist skills which enhance the deadliness of an ally's weapon and wreak havoc on an enemy's health. The Ritualist can also use the remains of the dead to defend the living-not by reanimating corpses as a Necromancer would, but through the ritual use of urns and ashes. Where the Ranger lives as one with the spirit world, the Ritualist can and will be its master.

A living conduit to the Spirit world, the Ritualist spawns powerful Spirit allies that inflict harm on foes, and can channel restorative magic that heals and protects injured companions.

The Ritualists are one of the oldest known professions on Tyria. Being unique to Cantha, they have existed long before the Exodus and the gods granting magic to the races. Before magic, the Ritualists focused on channeling spirits from the Mists. They relied upon the strength and wisdom granted to them by their powerful ancestors who maintained a connection to their descendants. Through their spirits, the Ritualists were able to practice magic, or something close to it. When magic was granted by the gods, many of the original abilities were strengthened and merged into their modern form. Though still relying on the power of the dead, their original skills are no longer a visible part of the profession.

Ritualists are masters of spirits, able to call upon them in battle for aid. They are the only profession capable of summoning allies that will both aid your team and hinder your enemies, unlike the Ranger's nature rituals or Necromancer's minions. They are also capable of using unique weapon spells and summoning ashes to aid in battle, and can directly attack foes or aid allies. As such, they are one of the most diverse professions.

For each rank of Spawning Power you have, creatures you create (or animate) have 4% more Health, and weapon Spells you cast last 4% longer. Some Ritualist skills, especially those related to Spirit creatures, become more effective with higher Spawning Power.