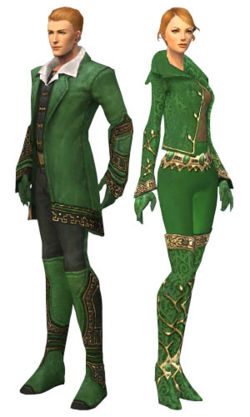 Mesmers are masters of illusion and control, subverting the enemy’s Energy for their own use, and that of their allies. Combined with any other profession, their skills provide excellent support, turning enemies’ powers against them and changing the very fabric of reality to hinder foes and help allies. Mesmers have the ability to cast spells quickly, which can make all the difference in the heat of battle. Their powers of domination allow them to take control of enemy skills and Energy. Their unique illusionary talents can slow or even halt enemy movement and skill casting, or cause imaginary illnesses that drain Health and Energy from foes while healing and energizing allies. While Mesmers are not known for brute strength, their ability to confuse, distract, and drain the enemy’s resources more than compensates.

A master of illusion, misdirection, and control, the Mesmer subverts the damage-dealing capabilities of others, manipulating their perceptions to achieve personal goals.

Increases the duration and effectiveness of your Domination spells, which allow you to disrupt and damage your enemies for their actions.

Increases the duration and effectiveness of your Illusion spells, which deceive your enemies and hinder their movement, attacks, and ability to cast spells.

Increases the duration and effectiveness of your Inspiration spells, which steal Energy from enemies, remove enchantments, and prevent damage.