Born in: Rin
Nation: Ascalon
Profession: Warrior
Age: 24
Devona is quite serious and direct in her dealings with others. She aspires to be a great Warrior, just like her father. At times this aspiration turns into a tremendous internal pressure to succeed. Devona's father was one of the leaders of Ascalon's Chosen, a prestigious and well-respected guild. He died defending the city walls against a raid by an Orrian guild during the last Guild War. Devona was only a little girl at the time, but since that day, she has dedicated her life to mastering the martial arts of sword and hammer.

Devona is the level-headed leader of the party. She always assesses a situation before rushing in, which sometimes puts her at odds with the brash Cynn. Despite her restraint and control, Devona has a temper, and it can get the best of her. She would sacrifice her own life to save the life of a friend, and she frequently puts herself in harm's way to protect those who travel with her. Devona has a deep sense of loyalty and duty. To her, there would be no greater honor than to follow in the footsteps of her father and give her life defending that which is most dear to her.

Devona naturally rises to lead most any group she is with, and in Cantha she often butts heads with both Togo and Mhenlo, despite her lack of experience on the southern continent. She always assesses any situation before rushing in. This often puts her at odds with the brash Cynn or the impulsive Lo Sha—and when her temper gets the best of her, this often erupts into verbal, though not physical, conflict. But whatever differences she might have with her allies, she is loyal to a fault. Devona would sacrifice her own life to save the life of a friend, and frequently puts herself in harm’s way to protect those who travel with her. Devona was the first of Mhenlo's friends to volunteer to join him in Cantha. Indeed, there was no question she would join him, she told the monk. Loyalty demanded it.

Devona (born either 1047 or 1048 AE) is an Ascalonian who travels with Aidan, Cynn, Eve, and Mhenlo. She is the daughter of Mordakai, one of the members of Ascalon's Chosen, who fought in the Guild Wars. He died in 1052 AE, when Devona was five, during a two day siege, in defense of the fortress of Kyhlo against the Orrian guild Zealots of Shiverpeak in order to keep their home safe; Devona often says that she grew up to know peace due to her father's sacrifice. She also believes that her father is watching her from the Mists; she acts to make him proud of her.

She grew up to be a captain in the Ascalon Army and member of Ascalon's Chosen protecting those of Ashford from the threats of bandits and the Grawl, and lived through the Searing and the initial Charr invasion. While adventuring with Aidan, Cynn, and Mhenlo, she met Eve in a graveyard while being chased by Charr; the group later joined Prince Rurik in an assault against the Charr and eventually joined the Ascalonian migration to Kryta. Afterward, the group traveled across Tyria, participating in the fulfillment of the Flameseeker Prophecies, and eventually went south to Cantha to aid Master Togo against Shiro Tagachi and the Afflicted.

During her time in Cantha, despite her lack of experience in the southern continent, she often rose to lead the group, which caused her to butt heads with both Togo and Mhenlo. Her tendency to look-before-she-leaps has caused issues with the impulsive natures of Lo Sha and Cynn; when she loses her temper she often erupts into verbal — but never physical — conflict. Despite any arguments with her allies, she remains loyal to them. She was even the first to volunteer to join Mhenlo in his trip south.

In 1075 AE, she and her group of comrades were recruited by Kormir into the Order of the Sunspears in order to fight against Varesh Ossa, Abaddon, and their demonic Margonites during Nightfall. During 1078 AE, the group aided in the fight against the Destroyers and their master. What they did after is unknown, but the group appears a year later for Gwen and Keiran Thackeray's wedding. 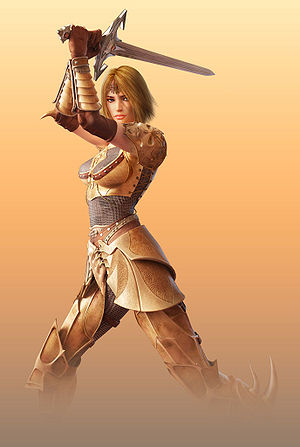