From Guild Wars Wiki
Jump to navigationJump to search
Spoiler alert: The following text contains spoilers relating to the story of Guild Wars Prophecies and Guild Wars Eye of the North. 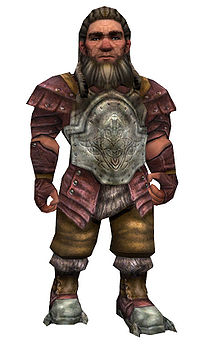 One of the oldest races on Tyria, the Dwarves are humanoids that are stocky, short, and are almost always bearded. The dwarves live in the Shiverpeak Mountains - specifically the Northern Shiverpeaks and the Southern Shiverpeaks.

In recent years, the dwarves have been plunged into a civil war between the older Deldrimor dwarves and the recent Stone Summit faction. This war has caused unrest throughout the Shiverpeaks and hold up most travel between Ascalon and the other human nations.

The exact origins of the dwarven race is unknown, but their legends claim that the Dwarves were forged by their god, the Great Dwarf, on Anvil Rock in the Northern Shiverpeaks. Over time the dwarves laid claim to the Shiverpeak Mountains, forming the Deldrimor nation. Though they traded with the human nations and were on generally good terms, the dwarves largely kept to themselves.

Sometime years prior to 1072 AE, Dagnar Stonepate, cousin to the ruling king, Jalis Ironhammer, created a splinter faction that opposed the Deldrimor. The Stone Summit was a group of xenophobic radicals who believed that it was the Dwarves' right to rule over all other races. Inevitably the friction between the two groups erupted into a civil war. This war saw its close in 1072 AE, when Ascalonian heroes aided Deldrimor in breaking the Stone Summit lines and eventually the death of Dagnar. The Stone Summit's main base, Sorrow's Furnace and the Iron Forgeman which laid within, were destroyed shortly after that and all surviving Stone Summit were forced into an exile into the Far Shiverpeaks.

With the Stone Summit's defeat, the Dwarves unearthed the Tome of Rubicon and a prophecy foretelling their race's doom was discovered. This prophecy saw itself fulfilled in 1078 AE when the Destroyers began to rise from the Depths of Tyria, led by the Great Dwarf's ancient foe, the Great Destroyer.

In order to combat the threat, Jalis Ironhammer and several Dwarves moved to the Far Shiverpeaks and performed the Rite of the Great Dwarf. Through the rite, the Dwarves were transformed into stone and had their minds linked, becoming the Great Dwarf as a collective consciousness. The Dwarves fulfilled the prophecy of the Great Dwarf destroying his old nemesis when they had defeated the Destroyer threat after undergoing the rite.[1]

After the war against the Great Destroyer, Duncan the Black, the new leader of the Stone Summit, attempted to harness the power of the recently slain Great Destroyer's soul, but was killed before his plan could succeed.

Eventually, all Dwarves undertook the Rite of the Great Dwarf.[2]

The Dwarves are a mining and smithing centric society with a monarchy.

Most of the Dwarves follow and worship the Great Dwarf as their creator and god. Outside of their creation legend, it is said that the Great Dwarf taught the Dwarves the fineness of crafting before he departed to the Great Forge, where all Dwarves go when they die. There are also dwarves who worship, or at least revere, Dwayna, Grenth, or the Great Destroyer. The dwarves who worship or revere Dwayna and Grenth only seem to appear during Wintersday. Many within the Stone Summit worship the Great Destroyer.

There is also a group of Dwarves within Deldrimor known as the Brotherhood of the Dragon who serve the oracle dragon Glint.

Deldrimor is a kingdom of Dwarves residing in the Shiverpeak Mountains that are ruled by a king. They are very friendly towards other races and passage through the harsh mountain range is welcome to anyone who is a friend of Deldrimor or an enemy to the Stone Summit. They hold a capital in Thunderhead Keep. 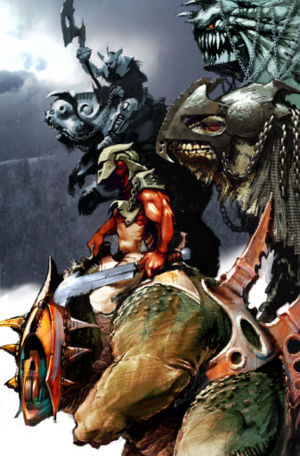 The Stone Summit is a xenophobic faction which has recently broke away from the Deldrimor dwarves while being led by Dagnar Stonepate. They have had some recent successes in seizing power and resources from the Deldrimor Dwarves, most notably in claiming the vast mine of Sorrow's Furnace, which became their main base.