Ogden's talent as a healer surfaced early in life, marking him as a chosen of the Great Dwarf from a very young age. As a child, he had the uncommon ability to cheer his fellow Dwarves with simple things: a helping hand to those in need, a kind word to ease suffering. He was a boon to his family and a blessing to his friends. Yet as he grew older, the very gift that set him apart became a burden to the young Dwarf. Empathy can be terrible, and it is a cruel thing on the battlefield. Ogden has retreated into himself, hiding within a shell of determination as strong as mountain rock.

Ogden is loyal to his Deldrimor king and is a true believer in the Great Dwarf. He knows the ancient prophecies of the Great Destroyer, having studied them from childhood, and there are few Dwarves alive who understand their implications quite as well. He realizes the enemy has come at last—fighting in the depths of the earth, boiling up in great numbers, freed by the recent earthquakes. His goal is to fight them, and he will—with any resources available ... until the last Dwarf falls on the battlefield. 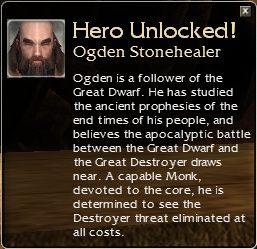 Arrival at Boreal Station upon completion of The Beginning of the End will unlock Ogden for that character.

Ogden starts with basic monk armor, labeled as Dwarven armor but with its own unique appearance. Like most heroes, his headgear is hidden.

"We must prepare. The end times are coming. Every Dwarf must do his duty."

What are these Destroyers?
"The Destroyers are fiendish creatures from the very heart of the Depths, mindless beings who exist only to destroy life. They have already consumed the Asuran homeland and toppled countless civilizations. Should they reach the surface, they will do the same to every living thing... human, Centaur, Dwarf, Charr... everyone."

What should we do?
"The Destroyers are dangerously close to the surface, and we Dwarves are too few to keep them contained for long. We must rally together an army of allies to repel the threat and pound these beasts into submission. That warlike Norn who restrained herself from fighting us could prove a useful ally for recruiting an army."

Epilogue
"I shall carry your name with me to the Dwarves fighting deep inside the cavern."

Olafstead (during the Wedding)
"There is an open bar. *hic* May the Great Dwarf give me strength..."

"How do you know you haven't already met a female dwarf? Eh? Eh?"
"Only after disaster may we be reborn."
"There is stone in my spirit, not my heart. I feel for my people and for their suffering."
"While we stand idle, the Destroyers gather. The Dwarves pay for every moment of indecision... in blood!"

"Blood has been spilled this day; a red sun will dawn come morn."
"By Malinon's Skull Crusher, we live to tell the tale!"
"By my uncle Stonecleaver's twiggy nose hairs!"
"For Jalis! For Deldrimor! For the Dwarves!"
"Get up, you! We're not done yet!"
"I'll pave the courtyard of my king's palace with your bones!"
"Perhaps your soul can be saved. Your body... that's another story."
"Rise, my friends, and finish them! The shield of the Great Dwarf is upon you!"
"Shatter, anvil! Break, darkness!!"
"The Great Dwarf guide my hand!"
"The greatest act of courage is to believe in yourself."
"The greatest battle starts with a single blow."
"There will never be a day that Dwarf courage fails!"
"We all die. Some sooner than others."

Bug.Ogden's portrait at the top of the inventory window extends past the top part of the box