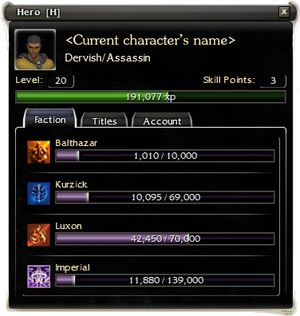 The Level of your character is displayed on the top of the Hero panel.

Level is a numerical indicator of how powerful a creature, player character or non-player character (NPC), is. All roleplaying characters begin at level 1 and, through the acquisition of experience points, can gradually gain levels up to a maximum level of 20. When characters reach that point, they can still accumulate experience points through normal means but will no longer "level up" with the completion of each level cycle as they once did. Instead, they will gain one skill point for every level cycle, which can notably be used to learn new skills from skill trainers. PvP-only characters are level 20 by default. NPCs can spawn at a higher or lower level, ranging from 0 to 42. Much like player characters, NPCs can gain experience and level up, but not higher than 20.

The level increases the base health, the number of available attribute points (for a player character) and the damage multiplier of armor-respecting skills.

To check a character's current level, see the Experience bar or open the Hero panel (default key "H"). Your characters levels can also be seen at the Character selection screen.

When a creature levels up or gains a skill point through experience, a graphical golden light and sound indications will play.

For most NPCs their base health, hard mode bonus health, armor, damage multiplier, and experience needed to next level (in cases where the NPC is lower than level 20) are also directly linked to their current level. Exceptions to this are spirits, bosses, and boss-like foes.

The base damage multiplier increases by about 5.3% for each level. See damage calculation for the exact formula.

1 Two exceptions to this are martial weapons, which also incorporate a weapon-specific multiplier, and armor-ignoring effects, which always use a multiplier of 1. This multiplier applies for a level 20 target.
2 For each new level, you would need an additional (2,000 + 600[X - 1]) experience points, where X is your current level.
3 At any given level, a character will have between (2,000[X - 1] + 300[X - 1][X - 2]) and (2,000X + 300X[X - 1] - 1) experience points.
4 In Pre-Searing, most level 1 foes have a lower 80 health instead. Exception to this are River Skale with 70 and Bandit Firestarters with 100
5 An experience level cap of 20 is imposed on any entity. NPCs, however, may have a set level as they spawn that is higher than this.
6 Total Attribute points by level 20 without attribute point quests.
7 Each further cycle consists of 15,000 experience points.
8 There are no NPCs in the game with an odd level higher than 33.