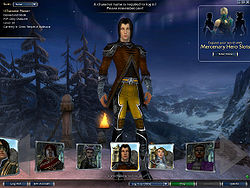 Here you can select a character to play and enter the game, or select an empty slot to create a new character (which will take you directly into the game using them).

Your character slots are displayed in a ring fashion around the bottom of the screen. If there are more slots available than will fit on the screen at once, the ring can be rotated by holding the mouse over the arrows. The sort order of the characters can be changed with a selector in the upper left corner of the screen.

The background of the screen changes according to the most recent campaign release. It is not possible to revert back to any of these screens, they are just shown here for reference. 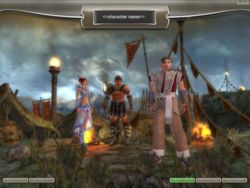 The Prophecies CSS did not allow for camera movement, and all characters you had were shown at once. Rather than thumbnails, you selected characters by clicking on them directly, which caused them to move forward.

There was no online store at this time. 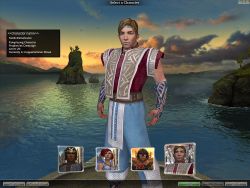 The Factions CSS added camera movement, and a new layout for characters. Characters were selected by clicking their thumbnails, and the selected character would appear in the center of the screen. Many UI elements, such as account key management, were changed to appear in a window instead of full screen.

About halfway through this screen's existence, the online store was added and its button placed in the upper right corner of the screen (example here). 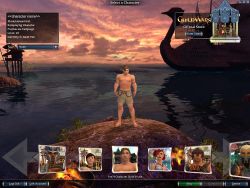 The Nightfall CSS was essentially the same as its predecessor, but with new borders, UI, background, and music to fit the Nightfall theme.

On July 17th, 2007, the sky used in this CSS was modified slightly: The left side was darkened somewhat. Some people claimed to hear a new gust of wind and the sound of wolves in the background. This may have been a foreshadowing to the Eye of the North CSS.

Eye of the North CSS[edit] 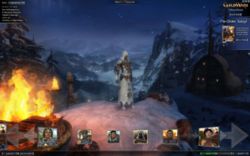 The Eye of the North CSS

On July 20th, 2007, the CSS was changed to feature a view of the Far Shiverpeaks with a Norn settlement in the background. The music and theme elements were updated to fit Eye of the North.

Bug. Characters wearing a costume will sometimes be displayed without one, even when "Always Show" is turned on.
Retrieved from "https://wiki.guildwars.com/index.php?title=Character_selection_screen&oldid=2638774"
Categories: