Player versus Environment (PvE) is a type of gameplay where players interact with computer-controlled opponents. Its counterpart is PvP, where the interaction is with other live players.

PvE in Guild Wars advances characters through a fixed story line, containing many different (and optional) quests and missions that are given by NPCs. Players are also immersed into the general environment and landscape of the game, as well as the lore pertaining to certain creatures, locations, NPCs and events.

PvE can be played completely on one's own or with the aid of computer-controlled henchmen and/or heroes. Alternatively, people may team up with other live players to advance through the game. 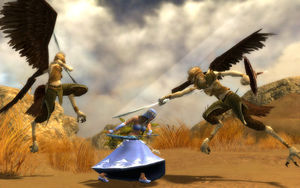 An example of fighting in PvE

In Guild Wars, the story is advanced primarily through a series of missions and quests to a pre-determined end. Completing these also progresses one geographically, opening up new areas of the campaign.

Some quests are required to advance the storyline, but secondary quests are entirely optional and may tell side stories, give special items, or add that special depth to the in-game world. Certain quests can also be completed multiple times, and are considered repeatable. 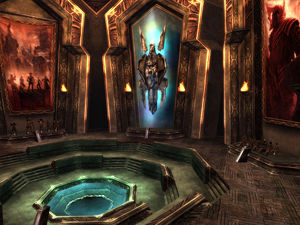 The Hall of Monuments.

Although the main purpose of PvE is to unfold the story and reach its conclusion, many people enjoy collecting titles, elite armor, dye to customize armor and weapons, and high-quality rare or unique items. Players who own the Eye of the North expansion may also set up displays in the Hall of Monuments.

To get the money or items they desire, some people repeatedly clear ("farm") one or more areas, sometimes making an additional character or characters with specialized builds.

Unlocking weapon and armor upgrades, skills, and heroes can be done in the normal course of PvE. Some players attempt to do so as completely as possible for both PvE and PvP benefits. For instance, heroes have access to all skills (including elite skills) unlocked on an account, which is useful for PvE play.

Once you complete a campaign, you may still continue playing. Many areas may be played repeatedly, for instance, elite missions, competitive missions, and challenge missions.

Hard mode, with more challenging missions and new goals, becomes available for each campaign once you complete it.