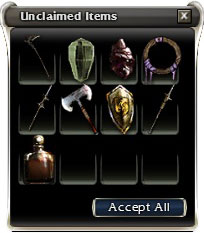 Unclaimed Items is a user interface window that appears after your character has been automatically teleported (e.g. after successfully completing a mission, dungeon, or mini-mission quests); it contains any remaining item drops that were assigned to your character at the time of teleportation.

Similar to other inventory windows

Unlike other inventory windows

The window appears when any of these conditions are met:

The window will not appear if you exit the original area using any method other than the ones listed above, including:

Once it appears, it will continue to reappear after you map travel to other outposts even if you close the window. It will also reappear for the same character even after switching characters or logging out. It will disappear after doing any of the following:

Bug.The window will always be behind all other windows, and renders between the background and the text/buttons of the chat window.
Retrieved from "https://wiki.guildwars.com/index.php?title=Unclaimed_Items&oldid=2668266"
Categories: