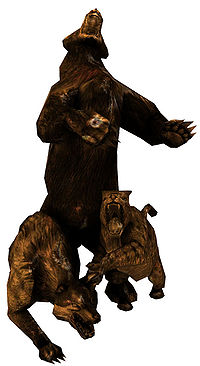 An animal companion (colloquial: pet) is an ally that can follow and fight alongside a ranger in combat zones.

Pets are first found as wild animals that have to be tamed using the skill Charm Animal. The Zaishen Menagerie can offer to breed animal companions if specific requirements are filled.

Pets will appear as long as their master has any of the ranger skills Charm Animal, Comfort Animal (PvE), or Heal as One (PvE) equipped when entering a combat zone.

Although pets are subject to usual AI issues, they have a faster movement or attack speed to compensate. In PvE they take 33% less damage and deal 33% more damage compared to a regular ally.

A player can make its pet the main part of its strategy. To draw out the pet's full potential, however, investing attribute points in Beast Mastery is required, as the damage dealt by the pet as well as the effectiveness of most pet-related skills scale with the attribute.

Attack: "Attack my Target". When activated, the pet locks onto your target, and will attack it as long as it's in aggro range. If the target dies, moves out of range, or is reselected, the pet returns to Guard or Heel mode, whichever it was in before it entered Attack mode.

Guard: "Protect Me". The pet moves to and attacks the same target as its owner, when the target is within range. (Spellcasters will find this range is slightly less than casting/wand range, so they may need to take a few steps closer to the target before the pet will engage.). The pet will also spontaneously attack any hostile foe attacking its master if the foe is adjacent to the master.

Heel: "Return to Me". The pet will not attack in this mode; if it is distant, it will return immediately to the owner's side.