This article is about the charmable animal. For the collector during Farewell to Gaile, see Raven (collector). For the Norn rank form, see Raven Blessing.

Ravens are one of the charmable animals available in Guild Wars Eye of the North. They are only found in Sacnoth Valley and during the Flight North; however, they cannot be charmed during the latter because the player is playing as Gwen. 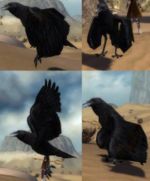