Death leveling is the process of leveling up a monster by dying repeatedly in its presence. Once the foe's level is high enough, you can kill it for experience or, in the case of animal companions, charm it as a pet. There are only two practical applications:

The easiest way to get every evolutionary stage of any pet is to level it to 20 and then release it to Emryd the Tamer in the Zaishen Menagerie Grounds. Afterwards, you can visit Wynn to release a charmable animal with your choice of evolution, ready to be charmed. Although you cannot charm a charmable animal that is more than four levels higher than yours, this limit is usually not a practical obstacle outside of pre-Searing.

The fastest way to death level a charmable animal is by use of heroes and sacrificial equipment or skills:

Finding the optimal place to level[edit]

However, the menagerie only allows parties of four, so you can occasionally death level faster in the wild (since more heroes can usually resurrect you more quickly).

Once you are near the desired animal, aggro it by attacking it once. Repeatedly suicide (e.g. using BiP) until you have only 1 maximum health. Then switch to the vampiric weapon; you will now die within half a second whenever you are resurrected. Every time you die, the animal will gain XP according to the level difference between it and you. Now you can go afk or watch as the heroes resurrect you and the animal levels. Once the animal has reached level 20, switch back to a non-vampiric weapon and charm the animal as usual. You now have a level 20 animal ready to be released into the menagerie and the process is finished.

The following table provides an overview of how many deaths are required for each level the animal has to reach, assuming the player is level 20.

With optimal hero skill bars and party size 8, a charmable animal can level from 3 to 20 in as little as 8 minutes. In the Menagerie and a 4 player party, expect around 13-15 minutes. 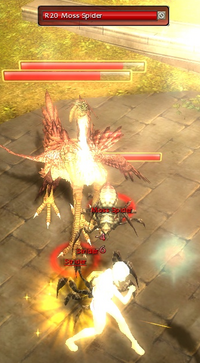 There are no hard resurrect skills in pre and no heroes, so you have to make use of a Resurrection Shrine. You can either death level the animal before charming or charm the animal first and then death level hostile NPCs, to help raise your pet's level.

The basic approach is to pull the enemy to the nearby resurrection shrine, and take off all armor (including shield and weapon with mods). Make sure the creature does not run away once you are dead; if they do, you may need to aggro a closer enemy or re-enter the area and hope for a better spawn. For Charr, only the roving patrols can be lured (the running patrols and stationary groups will not follow).

If you use choose to level first, there are ideal places for charming various pets:

Check after rezoning to be sure that you can lure just one animal (you could end up with three animals near Ashford or a half dozen near Baradin's estate). Since this can take several attempts, some people prefer the second technique. This method almost always produces an unevolved charmable animal.

If you charm first, you can death level the Charr in the Northlands (since they level in groups, this will be faster than other areas). In Wizard's Folly, you can level an ice elemental: run past the bears to the south and follow the river just east of the bears. Follow the river till you find the large aloe seeds: let them kill you. When you pop up at the shrine the ice elemental should be there but no monk. The monk is dead but if you watch them fight the monk wins each time.