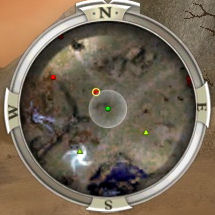 Entering the aggro bubble, as seen on radar.

Aggravate (or Aggro) is the mechanic of whether or not a group of enemies is aware of your presence. When you do not have aggro, enemies will act as if they can't see you. Once you have aggro of a group, they will follow and attack you until either you die, they die, or your entire team breaks aggro.

Understanding how to gain, hold, and break aggro is called aggro control or aggro management. Tanking is a popular form of aggro management which, when done successfully, makes both keeping the party alive and killing foes quicker, easier, and safer than if the whole group held aggro.

The are many ways to gain aggro or take aggro:

Breaking aggro or losing aggro means escaping from a group of foes so they break off and return to what they were doing before entering aggro. Known ways of breaking aggro are:

When two or more allies have aggro of a group, the enemies can switch between targeting each ally. This is known as split aggro or shared aggro. The target they choose to focus depends on a number of factors. Whilst these factors are not known, evidence suggests that they include armor rating, current health, movement speed, distance, using skills, whether you are wielding a caster or martial weapon, and how much damage you are dealing.

One ally running away will not be enough for them to lose aggro. Until the entire team breaks aggro, everyone who took aggro will retain it, unless they die.