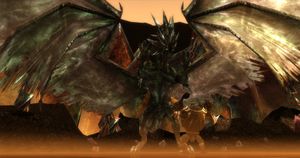 A solid tank build can withstand almost any foe.

Tanking is an "area denial" control-strategy in PvE in which a player deliberately exploits target fixation: that is, they draw-in the enemies’ attention (or “aggro”), and attempt to "ball them" with snares by making themself the sole focus of their attacks. The party member who performs this role is referred to as a tank.

Tank players have one goal: to control space. They have to be intimidating, hard to move, and harder to defeat.

The ultimate goal of this strategy may vary according to both party member composition and the situation at hand. Tanking usually involves standing your ground, holding a powerful enemy (or a large group of enemies) in a confined spot while the rest of the party attacks and defeats it. The player who is acting as the tank generally does not contribute to the attack; the tank will no doubt be busy keeping themselves alive through snares and mitigating the incoming damage. A player that decides to tank must be capable of withstanding large amounts of damage, preferably without the aid of another party member.

Tanking takes advantage of a weakness in Foe behavior: when an enemy starts attacking a particular character, it usually doesn't stop until either it or its target is dead. In order for this weakness to be exploited, however, it is important that all other party members keep well outside of the enemy's Danger Zone-aggro range when a tank starts the attack. If the enemy finds an "easier to kill" character (i.e. lowered Health; weaker Armored) in range after the initial aggro, but before it is has committed attacking, it may ignore the tank and run for the easier to kill character.

An example of tanking while cornerblocking.

When terrain is factored in, tanking is combined with another exploit in Foe behavior called cornerblocking, a concept identical to the protected flank Roman infantry tactics. Cornerblocking involves a player aggro'ing an enemy or group of enemies in such a way that the enemy tries to pursue, but is blocked by another player (or the same player) who is standing next to a wall or ravine. This strategy works because enemy AI does not understand how to properly circumnavigate players that are blocking their pathways. The enemies encounter this player, but since there is a wall on one side, they do not even try to get around, and so, they change targets and focus their attacks on the player standing in front of them. It is called "cornerblocking" because it works best when aggro'ing an enemy or group of enemies around a corner.

This strategy is generally unsuccessful in PvP, as experienced human players will focused on their primary target, san tactically ignoring better, weaker targets. Also, a human is obviously capable of navigating their character around most obstacles, while enemy AI has more problems with this. A human would also know when to flee (or, in circumstances where it would prove more advantageous, kite) if their health is getting dangerously low while, in general, enemy AI does not.

There are many ways to tank. The classic tanks are Warrior characters, thanks to their very high Armor Rating, using skills that help to mitigate damage or to block attacks. However, there are many different ways to reach the same goal, so common tank builds use one of the following:

A perma tank (or SF tank) utilizes a permanent Shadow Form to gain immunity to harmful spells. It has lower energy costs than a Terra tank, but misses the multitude of powerful defensive enchantments of Earth Magic.

With a 33% skill recharge reduction, a weapon of Enchanting and 12 ranks in Shadow Arts, any profession with enough energy reserves is able to keep up Shadow Form permanently. Primary assassins have more freedom of choice (see Perma Shadow Form - Setup). The effects of any equipment which benefits from enchantments, such as Blessed Insignia or Sheltered by Faith can be reliably maintained.

To keep Shadowform permanently active, skills such as Deadly Paradox or consumables that reduce recharge time are needed. Since Shadow Form only marginally protects from attacks by itself, it is often combined with Shroud of Distress for blocking and additional damage reduction. Additional defensive skills may include healing, higher block chances, extra armor, or more damage reduction, depending on enemy skills.

Stance tank is a less common type of PvE tank build which heavily - as the name implies - relies on stances to survive. Stance tanks are mostly primary Warriors or Rangers and in case of the latter secondary warriors. Stance tank builds are meant to draw, hold and survive dangerous groups of physical attackers and damage dealers, while either inflicting damage through their weapons or punishment skills. Mostly, they are used to solo farm melee attackers.

Stance tanks usually rely on equipment which benefit from being in a stance, such as shields of Endurance.

Warrior stance tanks rely on Tactics stances, such as Auspicious Parry and Gladiator's Defense in addition to stance-like skills like Deadly Riposte and Riposte, for their typical combination of defense and damage. Dolyak Signet is commonly used to reduce damage taken even further and prevent knock downs. 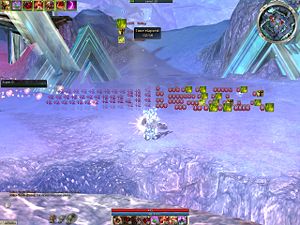 A weapon of Enchanting and Geomancer Insignia are generally used. A shield or off-hand with +10 armor vs earth damage can also be used for further damage reduction.

Terra tank builds rely on Earth Magic enchantments, such as Armor of Earth, Obsidian Flesh and Stoneflesh Aura for defense. Glyph of Concentration is commonly used to prevent interruption and Grasping Earth is commonly used as a snare.

A Mesmer secondary profession is often used, utilizing Mantra of Earth and Stone Striker for more damage reduction and to make up for the energy degeneration of Obsidian Flesh.