A minion master is a Necromancer or Ritualist specializing in raising minions and corpse control. 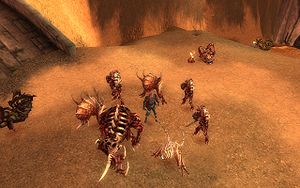 The minion master relies on target saturation by leveraging an army of undead minions created by exploiting the corpses of fallen fighters. The minion master does little direct damage to enemies and instead, concentrates on raising and maintaining minions, who in turn damage, distract, or overwhelm foes.

The basis of every minion master build are the minion skills and minion caring or buffing skills, which define what types of minions the minion master will be able to control. Most builds contain the elite Aura of the Lich, Animate Flesh Golem or Jagged Bones, together with one or two non-elite minion skills, to ensure a constant supply of undead servants.

Since exploitable corpses are not always present in abundance, minion masters ensure a steady stream of healthy minions with one of two approaches: healing minions or non-corpse minion replenishment, such as Jagged Bones. Minions are healed through Death Magic spells (e.g. Verata's Sacrifice or Blood of the Master) or by utilizing secondary Healing Prayers spells (e.g. Healing Ring, which takes advantage of minions clumping around their master outside of combat). Their numbers may also be replenished using the elites Jagged Bones or Aura of the Lich, which effectively respawns minions that die.

If using skill combinations such as Jagged Bones, Explosive Growth, and/or Death Nova, it can be more effective to cause damage by allowing the minions to die, allowing you to trigger these skills repeatedly on foes, generating more corpses and repeating the cycle.

The role of the minion master can be compared to that of a steam roller: taking time to get going, but once momentum is gained, very difficult to stop. Most minion masters only become useful once a few corpses have been generated. Minion Masters using skills such as Aura of the Lich and Jagged Bones require fewer corpses to be effective, as they are able to spawn minions constantly.

Since minions suffer from increasing health degeneration over time, traditional minion masters are also somewhat rush builds; they are more useful in killing enemy after enemy and less in letting enemies pass by via clever maneuvering. Additionally, they are a bit of an all-or-nothing build. Minion masters usually are very safe characters, having a wall of minions in front of them and powerful self-heal spells on their skill bars. However if the Necromancer himself dies, the minion master's minions will also become hostile towards the remaining party members.

Minion masters rarely make it into the fast-paced PvP arenas. They sometimes can be found in specialized pressure builds in Heroes' Ascent or GvG. The only area of PvP where minion masters are very common are the large scale Alliance Battles and Competitive Missions, where corpses are more plentiful than in other forms of PvP. A PvP minion master's skills will vary slightly from a PvE minion master's skills in that they must concentrate more on survival since other players are often intelligent enough to eliminate the minion master so as to make his minions hostile to both teams.

Generally, you need only one or two minion animation skills (since their recharge time is short). Your choice depends on your goal:

Since the basis of the minion master build only requires 4-5 skills to work, minion masters have plenty of room on their skill bar. Usually this is used to bring either some direct damage to help the team gain the first corpses or some healing skills (like a hard res) that make use of a secondary profession. Another opportunity is to use minion based damage mitigation like Dark Bond.

The single largest disadvantage of the minion master is its dependence on corpses. Deaths provide the corpses needed to raise minions and the energy to cast those spells at the same time (via Soul Reaping). The minion master needs a good group to kill the first enemies for him, and he needs a constant flow of new corpses afterwards. Some enemies in PvE do not leave exploitable corpses (for example, Titans), a serious problem for minion masters. The minion master also has problems in missions that do not involve large numbers of enemies or have long periods without enemies.

Minions are undead which will take double damage from holy damage, found mostly in Smiting Prayers and Mysticism. There are also some specific skills that deal with minions, such as the Mesmer's Spiritual Pain, the Monk's Banish, the Paragon's Holy Spear, the Dervish's Banishing Strike and the Ritualist's Elite Consume Soul.

In terms of AI, minions are the dumbest unit a player can control, much less controllable than henchmen or pets. Usually, the minion master can only hope that the minions will overwhelm the enemies with their sheer numbers; getting minions to attack priority foes first is very hard.

Lastly, the death of a minion master is always a risk to the whole party since the minions are set loose and will attack everything in sight.