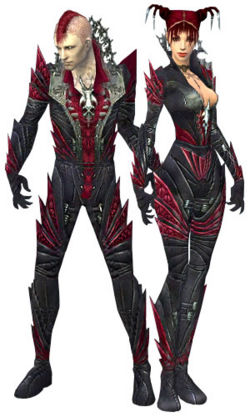 Necromancers , calling on the spirits of the dead, and even death itself, to overpower enemies and assist allies. In sacrificing Health and taking curses and diseases upon themselves, they can deal large amounts of damage to those foolish enough to oppose them. Dead and dying enemies become unwilling allies in their hands. Necromancers have the singular ability to absorb Energy from an enemy’s death, and can raise a fighting force from the corpses of their foes. Curses, which often cost the Necromancer dearly, exact an even greater toll from enemies, who find that their Enchantments and healing skills are rendered useless. Due to the sacrificial nature of their methods, Necromancers must practice patience and self-discipline to survive.

One who has learned to draw power from the blood sacrifice and communion with death, the Necromancer uses black magic to cast curses and raise undead minions.

For each point of Soul Reaping, you gain 1 Energy whenever a non-Spirit creature near you dies. You may only gain Energy in this way 3 times every 15 seconds.

This attribute increases the duration and effectiveness of your Curse skills, which reduce your enemies’ effectiveness in battle.

Blood Magic increases the duration and effectiveness of skills that steal Health from your enemies.

Increases the duration and effectiveness of skills that deal cold and shadow damage to enemies as well as those that increase the effectiveness of your undead minions. The higher the Death Magic Attribute is, the more undead servants you may control at one time.