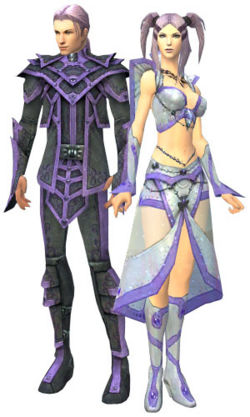 Elementalists summon the powers of earth, air, fire, and water and command them at will. They can inflict more damage in a single strike than any other profession. Earth Magic summons quakes and eruptions, encases enemies in stone, or protects allies. Air Magic harnesses the power of tempests to strike foes down with lightning or enable allies to run like the wind. Fire Magic manifests flames, fireballs, molten lava, and even meteors to burn enemies to a crisp. Water Magic conjures mist and ice to slow enemy movement and attacks, blur vision, protect allies against magic, and inflict cold damage on enemies. Elementalists have access to Energy regenerating skills, and when chosen as a primary character, they can increase their maximum Energy over time. The wise Elementalist avoids becoming surrounded, but keeps a local area-of-effect spell on hand just in case.

The master of arcane lore and magical aptitude, the Elementalist calls upon the power of fire, earth, air and water to obliterate enemies.

Energy Storage increases your character's maximum energy by 3 per rank, and improves skills that help you regenerate energy.

Points to Air Magic increases the duration and effectiveness of your air skills, which pierce armor, cause Blindness, and knock down enemies, stunning them.

Build up Earth Magic to increase the duration and effectiveness of your earth skills, which can protect both you and your allies or attack your opponents, ignoring armor level.

Improve Fire Magic to increase the duration and effectiveness of your fire skills, which inflict fire damage and can affect large areas.

Allocate points to Water Magic to increase the duration and effectiveness of your water skills, which slow enemy movement.