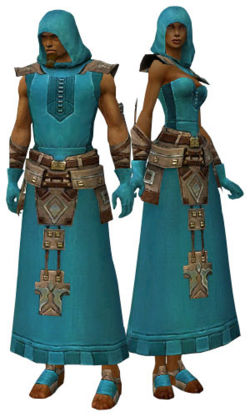 Serving the gods as holy warriors, dervishes stand confidently in the whirlwind of conflict. Martial techniques perfected in the deserts of Elona allow a Dervish’s scythe to lash out quickly at multiple opponents, surrounding the holy warrior with a swath of destruction. Initiates often learn spells of self-protection, prayers that rush a combatant into battle, and invocations that empower attacks with elemental fury. Masters of the profession can assume the form of a god, enacting divine will with holy blessings. Keenly aware of the conditions of a fight, a Dervish can reap great benefits by using multiple Enchantments. Wandering the savannahs and deserts of Elona, the faithful Dervish chants prayers to the earth and wind... and the fury of the sandstorm answers in response.

Bolstered by the blessings of the gods, these holy warriors reap the benefits of multiple Enchantments. With a sharpened scythe, the Dervish can unleash a whirlwind of destruction.

Dervishes are scythe-wielding holy warriors who can attack multiple enemies at once. The Dervish has combat-related Enchantments, some inherent healing, and protection abilities. Their greatest power, however, is to evoke the power of the gods.

The tradition of the Dervish is unique to Elona and traces back to the Shattered Dynasty era when wandering ascetics sought to bring comfort to a land engulfed in civil war. Soon the traditional traveler's staff was replaced by a scythe, a humble weapon, but deadly in skilled hands. The fighting techniques of the Dervish are often stunning to behold, as they make use of whirling moves that summon the power of wind and earth. A true Dervish, however, is always the calm and confident eye of the storm.

The Dervish's attire is a testament to the dual nature of the Dervish as both priest and warrior. Followers of this profession wear a robe to show their faith in the divine, bracers to demonstrate their prowess in combat, and a hood to mark their humility before the gods. This garb provides limited armor, but the Dervish is shielded in battle by their agility and by the Enchantments that they cast upon themselves. These Enchantments make them resistant to injury, allow them to turn aside the attacks of their foes, and lend elemental power to their attacks.

Because the broad sweep of a swinging scythe can strike multiple foes at once, the Dervish seeks the very heart of a battle, calmly and intently casting spells on themselves even while surrounded by foes, then suddenly unleashing a flurry of devastating, whirling scythe attacks.

Among the Dervish's most precious secrets is that of transformation. The Dervish, when roused, may channel divine powers and change their form temporarily to become the physical embodiment of a god.

There is no established church or school for Dervishes in Elona. Instead, a master passes down their secrets and philosophies to a single pupil at a time. Even after that pupil has set out into the world to follow their own path, it may be some years before a master takes a new pupil.

Mysticism, the Dervish's primary attribute, reduces the cost of your Dervish enchantments by 4%. It also gives +1 armor per rank of Mysticism while you are enchanted in PvE.

Scythe Mastery increases the damage you do with scythes and your chance to inflict a critical hit when using a scythe. Many skills, especially scythe attack skills, become more effective with higher Scythe Mastery. When attacking with a scythe, you strike up to three adjacent foes in front of you.

This attribute increases the duration and effectiveness of the Dervish's Wind Prayer skills, including prayers that speed movement and lash enemies with cold damage.