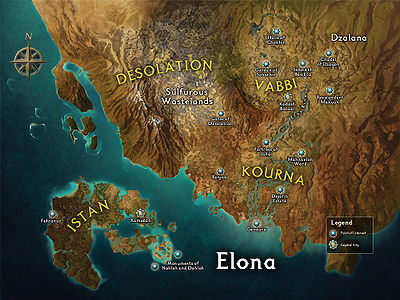 Elona thrives in a realm surrounded by savannahs, deserts, plains, and wastelands. Three allied provinces stand side by side to support this proud nation. To the west is Istan, an island province littered with the ruins of an earlier Elonian empire. To the east is Kourna, known for its fiercely loyal soldiers, dedicated army, expansive estates, and agriculture. The northern province of Vabbi is home to wealthy merchant princes, a land where successful Elonians believe their safety, security, and affluence allow them to sponsor many of their nation’s greatest achievements. Despite occasional rivalries, these three provinces—Istan, Kourna, and Vabbi—have kept Elona prosperous and strong for over a thousand years.

Elona, often called the Land of the Golden Sun, is a continent that is found southeast of Tyria and northeast of Cantha and the Battle Isles. It was once ruled by the Primeval Kings, whose rule spread throughout Elona and eventually all the way to Tyria in the Crystal Desert and even established Kryta as a colony in 300 AE before the Primeval Dynasty fell due to the Scarab Plague.

The Land of the Golden Sun has weathered a long night and lived to see a new dawn. It has been three years since Varesh Ossa's reign of terror nearly unleashed Abaddon upon the world, and the effects of that event still resonate throughout all three provinces.

Kourna, home of Warmarshal Varesh, was perhaps hardest hit in the aftermath. In addition to the dark lord's nightmares, which have yet to completely fade from the minds and memories of its people, Kourna had to deal with a power vacuum after the loss of its leader and most of its military. The Sunspears, along with Morgahn, an ex-general of the Kournan armies, proved invaluable to its recovery.

Both Istan and Vabbi fared much better after the death of Abaddon. The Istani, long supporters of the Sunspears, were lauded for the aid they provided in the campaign against Varesh. Attendance at Kamadan festivals has seen a marked increase, as people from across the world come to the Sunspear homeland to pay their respects. In Vabbi, the three princes spread their wealth copiously throughout the province to heal any wounds to their vaunted architecture as well as the rarified sensibilities of their people. Annual performances of Norgu's Nightfall in the Bokka Amphitheatre draw huge crowds...if not rave reviews.

All of Elona has prospered from increased trade with Cantha and Kryta in recent years, and many Elonians have begun traveling the world, for both pleasure and adventure. But as word spreads of strange rumblings from beneath the ground, adventurers are likely to return to Elona to investigate.

Land of the Golden Sun.

Getting to Elona requires a valid Guild Wars Nightfall access key to have been added to your account. Once added, you can either create a new Nightfall character via the character selection screen, or take an existing character over by completing one of the following quests:

Once you have unlocked travel to the respective continents, you can map travel at anytime from any continent to Kamadan, Jewel of Istan.