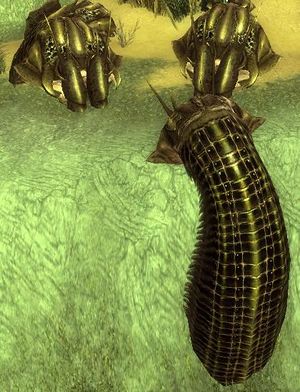 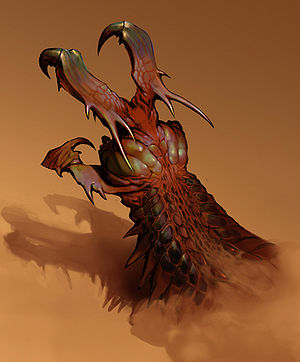 Colossal wurms roam the sulfurous wastelands of the Desolation. These burrowers tunnel through soft soil with amazing alacrity. Elonians know them by their more formal name: the Junundu. According to historians, the undead lord Palawa Joko commanded these wurms to patrol his kingdom, but the junundu’s inability to tunnel through solid rock limited their usefulness. Myths tell of great heroes using junundu to travel across the wastelands, covering vast distances safe from the sulfuric clouds. More recent accounts describe devastating wails and thunderous attacks that shake the very earth and topple buildings in their wake.

According to legend, Junundu society is developed enough that they act in service to a queen mother: a subterranean monstrosity called Aijundu. Lurking below, Queen Aijundu patiently waits for foolish surface-dwellers who would dare to cross her apocalyptic domain. As long as wind shifts the desert sands, some say, she will lie beneath it...waiting.

Junundu are wurms that are highly sentient, and are capable of traveling through the sulfurous Desolation. They can be tamed in the Gate of Desolation mission, allowing humans to traverse the otherwise deadly wasteland.

The Junundu have two sexes; the females are larger than the males. The largest dominant female is the Queen, and has her own harem of males which are her territory. Once the Queen becomes old or weak, another large female can challenge and take over as the Queen.[1]

Players assume the form of a Junundu when under the Desert Wurm disguise.