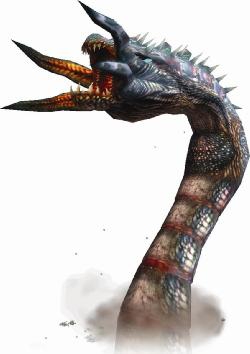 Distant cousins to the sand, chaos, and desert wurms, the great ice wurms are particularly unusual members of the species, making their home in the frigid marches of the Shiverpeaks rather than the warm territories their brethren favor. A thick layer of blubber beneath their tough skin helps insulate them from the cold. These wurms are significantly stronger and more deadly than their southern counterparts, able to burrow through upper layers of stone, as well as dirt or sand. Such abilities, of course, make them much more formidable opponents.

Wurms are giant worm-like creatures that burrow through the ground. Some wurms are able to use extended ranged "siege" attacks. They are generally larger, more aggressive versions of worms. The larvae state even resembles worms.