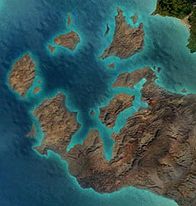 Situated on a peninsula south of Ascalon and west of the Crystal Desert, Orr was a vibrant, proud, and prosperous nation. Its citizens were the favored of the gods, living in the shadows of Arah, the deserted city once inhabited by the likes of Melandru, Dwayna, and Balthazar. Deeply spiritual, the Orrians looked after the buildings and structures left behind when the gods left Tyria, caring for them in the hopes that one day, the divine beings who created magic and bestowed it upon the world would return.

The Orrians were a peaceful people, hoping only to do their duty toward their gods and content to be rewarded in either this life or the next. When the guilds began feuding, Orr as a nation tried to stay out of the conflict. This was not the sort of struggle that entire kingdoms got involved in. But when the strife overflowed into armed conflict, and guilds from the other human nations began fighting in the streets of Arah, Orr rose to defend itself and the city of the gods.

Soon after Orr mobilized its armies, Kryta and Ascalon did as well, and what had started as a dispute between localized groups became an all-out war. The Guild Wars raged for nearly fifty years. During that time, none of the three human empires was able to assert dominance over either of the other two. While Ascalon, Orr, and Kryta were busy fighting with each other, they became blind to the threat from the north—the Charr. The northern beasts swept in, taking Ascalon in a spectacular magical battle. 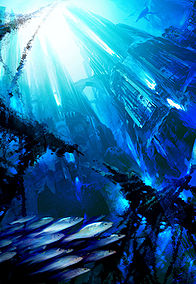 At first, Orr was saved from much of the fighting. The guilds with allegiances to Ascalon and Kryta withdrew, heading back to defend their homes. Orr regrouped, granted a moment to prepare simply because they were farther south. The Charr had to make their way through Ascalon before they could reach the gates of Arah. But eventually Ascalon fell, and the Charr arrived in Orr.

Hopes were high that the Charr would be defeated quickly. The Orrian army was the equal of any in Tyria, and the invaders had already fought a long battle against the Ascalons. But those hopes were dashed in less than twelve hours.

The invaders reached the gates of Arah without breaking stride. The Orrians failed to protect their charge. With defeat at the doorstep and the kingdom nearly in ruins, one man turned to a forbidden magic. The king's own personal advisor in the matters of the arcane took it upon himself to destroy the invaders, no matter the cost. Unrolling one of the Lost Scrolls, kept inside a warded vault deep within the catacombs below Arah, he spoke the words of a litany that spelled the end of the Kingdom of Orr forever.

There are few who survived that day, now known as the Cataclysm. While the Charr were never allowed to step foot in Arah, few count what the king’s advisor did on that day as a victory. The resulting explosion felled the invading army where it stood, but so too did it sink the entire peninsula, leaving only a scattering of small islands in its place. The beautiful city of Arah was consumed. What’s left above water now lies in a pile of ruins, blackened by the Cataclysm and years of neglect. All that remains in the wreckage of Orr are the wandering dead—those souls unable to rest in the shadow of this great disaster.

The Kingdom of Orr was the first human kingdom established on the continent of Tyria, created by both god and man.[1] From 100 BE, the kingdom was ruled alongside Ascalon by King Doric until his death in 1BE. Orr gained its independence in the year 2 AE. At the time of the Second Great Corsair War and King Zoran's reign, Orrian territory is known to have extended into the Tarnished Coast, and included the caverns now known as the Shards of Orr. Orr was once the most vibrant, proud, and prosperous human nation in the known world. Its citizens believed themselves to be the favored of the Six Human Gods, living in the shadows of Arah which was once inhabited by the gods themselves. Orr was known nexus of arcane activity and research; in the Orrian History Scrolls, an unknown Ascalonian author expresses shock at the casual way with which magic was viewed by the citizens of Orr, which is now known to be a place of extremely high magic concentration. Since its sinking in the Cataclysm in 1071 AE, it has been inhabited by both wandering undead and corsairs seeking refuge and to pillage.