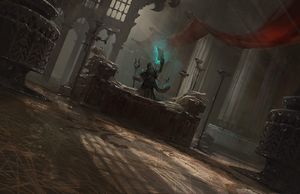 Vizier Khilbron spells out the words that would doom his nation.

At the height of the third Guild War, the Charr Flame Shamans led a massive offensive against the three human nations of Tyria: Ascalon, Kryta, and Orr. Their flame cauldrons decimated Ascalon in the Searing, and the Charr troops marched south, threatening to invade Orr. In panic, Vizier Khilbron searched forbidden texts and discovered a scroll that had been hidden away by the Five Gods. He stole it from Arah, taking it to his tower, and there, unleashed its might upon the land. With a flash of light and explosion of flame the nation of Orr crumbled and was lost into the depths of the sea. The Cataclysm defeated the Charr—but was also the end of Orr.

The waterways which bordered Orr were renamed by Krytan sailors, who called them 'The Sea of Sorrows'.

During Guild Wars Nightfall it is revealed that Abaddon orchestrated the destruction of Arah by empowering the Charr to launch an assault on the human kingdoms by giving them the Titans to worship as gods, and manipulating Khilbron into unleashing the Cataclysm through his demonic servant Razakel. Additionally, many of those slain by the Cataclysm are now trapped in the Realm of Torment, indicating they have been touched by his presence.