This article is about the continent of Tyria. For information on the world of Tyria, see Tyria (world). 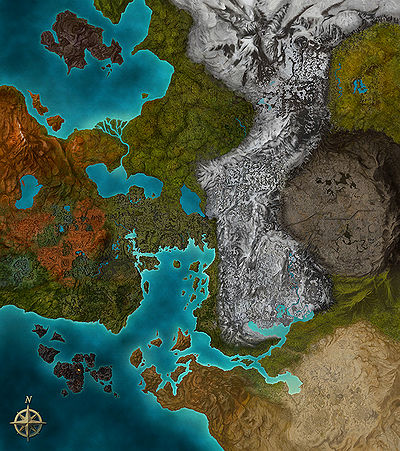 Tyria is the northernmost known continent of the world with the same name. It is the home of the former city of the Gods and the Tomb of the Primeval Kings. Tyria is home to many races, most noticeably the humans, Charr, Dwarves, Norn, and recently, the Asura.

Tyria and the surrounding islands are divided into several major regions

Regions in Guild Wars Eye of the North

Getting to Tyria requires a valid Prophecies or Eye of the North access key to have been added to your account. Once added, you can either create a new Prophecies character via the character selection screen*, or take an existing character over by completing one of the following quests:

*Only if you have a Prophecies key.

Once you have unlocked travel to the respective continents, you can map travel at anytime from any continent to Lion's Arch or Boreal Station.