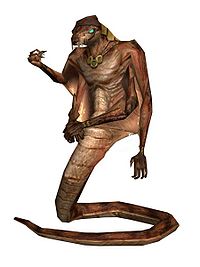 The Forgotten are a group of ancient snake-like beings that stand upright. It is said that they were placed on the world of Tyria in 1769 BE by the Six Gods in order to guide the other races. They originally resided all over Tyria. At an unknown time before 100 BE, the Forgotten were at war with the Charr on the border of what would become Ascalon, near the Blazeridge Mountains. In 0 BE, the Forgotten aided the Five Gods in their war against Abaddon and acted as wardens of the defeated god and his army within the Realm of Torment - where they continued this duty until Nightfall occurred in 1075 AE.

The Forgotten are said to be linked to the Facets that reflect the power of the Human Gods.[1]