This article is about the event. For the Guild Wars campaign, see Guild Wars Nightfall. For the Elonian prophecy, see Nightfall (prophecy). 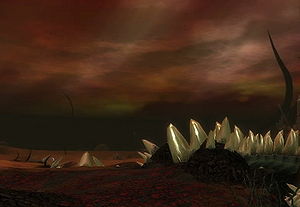 The nightfallen Marga Coast. Notice the dark sky, huge tentacle in the background, and teeth coming out of ravines.

Nightfall is an event prophesied to occur in Elona, where a forgotten god will be released, possibly leading to the end of the world. It is the subject of the Guild Wars Nightfall campaign.

Nightfall is revealed to be the release of the god Abaddon into the world of Tyria, changing the world as well into a place more like the Realm of Torment. As befits the name, areas affected by Nightfall become much darker, among other changes to the terrain.

In the Jokanur Diggings mission, it is discovered that Varesh Ossa is attempting to cause Nightfall, using information found on the Apocrypha. Further into the campaign, Varesh uses a number of rituals to usher in Nightfall, including one at Gandara, the Sebelkeh Basilica, and at the Mouth of Torment. This last ritual is not completed, but still is effective enough to cause Nightfall throughout Elona.

Pieces of land affected by Nightfall go through several stages. At first, tentacles and Torment Claws begin to appear. These are sections of the Realm of Torment pushing their way into the world of Tyria. After enough tentacles and Torment Claws enter the area, the terrain changes to resemble the Realm of Torment. The sky becomes darker, the ground becomes filled with the ends of tentacles sticking out of the ground, and new ravines and pits form, some with sulfur. Human structures are often broken or destroyed by the terrain changes. In the Marga Coast, teeth appear from the ground as well. When the terrain changes, Margonites, Torment creatures and other demons also take over. It is not shown in game what Nightfall would be like if taken to completion, though it is suggested that the world would become fully like the Realm of Torment.

In game, players see the Torment Claws appear at the end of the Dzagonur Bastion and Dasha Vestibule missions. The Garden of Seborhin and Marga Coast are seen transformed by Nightfall (In, respectively, the Nightfallen Garden and the Nundu Bay mission). The Desolation also appears to be under some effects of Nightfall, including dark skies and tentacles taking over ruins, though some of these may come from proximity to the Mouth of Torment itself rather than Varesh's rituals. Nightfallen Jahai resembles what Nightfall would do to Jahai Bluffs if completed.