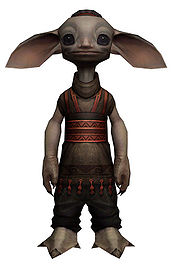 The Asura are a race of diminutive but incredibly intelligent humanoids who live beneath the surface of Tyria. They see the world as a complex magical machine, and their philosophy of "Eternal Alchemy" touches everything they do. Inventors, scientists, and spellcasters of every stripe, the Asura consider many other races beneath them—and are not afraid to tell them so at every opportunity.

It has been centuries since Asura were seen aboveground. In fact, until recently, many humans thought they were a myth. However, recent reports have confirmed their existence.

A diminutive race from the depths of Tyria, the Asura wish to expand their empire to the surface world. Exceptionally intelligent and technically minded, they use magical skills, stone, and metalworking to create weapons. Asura believe they are destined to rule the world, with the larger, less intelligent races as their subjects.

There appears to be little physical difference between male and female Asura. Males generally have pointed ears and females generally have rounded ears, however there are exceptions, such as Sokka, a male with round ears, and Jezza, a female with pointed ears. Oggy claims that Asura consider their ears to be of importance to show their worth; one of the reasons Florggi dislikes Oggy is because of his "teeny-tiny ears".

The only known Asuran word is "Bookah." Asuran writings are known to be half-mathematical and half-structured.[1] 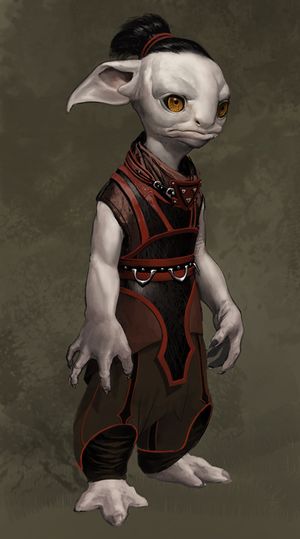