The core feature that Utopia was being built around was giving players choices through the form of quests and having consequences for the collective choices made by the community. Imagine a story line that branched every couple of weeks/months based on the total number of completions of one set of quests vs another. Which group of people did you choose to provide assistence to? (Did you focus your efforts on the hospital or the orphanage?)

While we were building out the story and associated characters, we started playing with the in-game tech more and more. It got to the point where we started to ask questions about things fundamentally associated with Guild Wars as a whole. I think the big turning point came when we essentially created a prototype for something like Shaemoor, that was a persistent map that had 50+ people running (and jumping) around. Like Joe mentioned some of the foundational code work was built around instances being the core PvE content and as we started to try to break that mold the tech hurdles started becoming larger. I know the engine programmers were also trying to push the boundaries on the quality of assets we were creating, but I don't remember the specifics there. Ultimately it wasn't a single idea that pushed us over, but enough things popped up that we decided our efforts would be better spent moving our designs into a new game.

In the interest of offering more variety with an efficient use of existing models, ArenaNet played around with the idea of texture alternatives.[1] 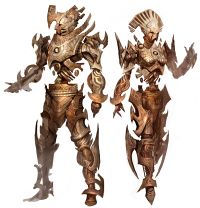 I remember a little about this, but most of it was only in very early prototyping so please take this with a grain of salt! None of the content for Utopia ever reached a true playable state, so this is very much my speculation from early designs that were sent to content programming for feedback.

There was an iteration of Summoner that would have been about quickly cycling their summoned creatures - compared to Necromancers who try to keep their minion flock going, Summoners would be using up or combining their summons to bring out stronger or alternate versions to suit the situation.

A gimmick for Chronomancer that made it to prototype was that they would have very long cast time spells, but instant casts that affected a spell while it was casting. So, you might start warming up a 4 second spell but then use a second skill before it activated to modify its effect.

Unfortunately I don't know much about the class lore or if any other classes were considered. Both classes tied into some of the themes for Utopia (time, beings lost in the Mists) but I'm not familiar enough with the design to elaborate there.

I don't believe we got to the point of really developing class lore for Utopia. Most of it was still in early paper design when we cancelled the project. I don't recall us ever really considering any other classes than Summoner and Chronomancer. 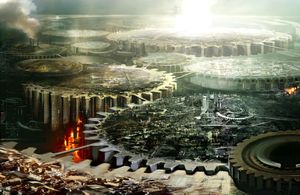 "The Hub of Time" by Daniel Dociu.

Utopia was to be set in Xotecha, not a continent in the world of Tyria (as with the other campaigns), but an island of reality in the Mists, the multiverse of the Guild Wars setting.[2] According to Linsey Murdock, Xotecha was a sort of home or playground of the Gods of Tyria, and was to feature an expanded pantheon of the gods, such as Dwayna's father. It would also feature characters from across the timeline, and both Gwen and Mordakai, Devona's father, were to be main characters.[3] Utopia concept art also features Saul D'Alessio and Lady Glaive's corsairs. Joe Kimmes later said that the line about the playground of the gods "doesn't sound accurate".[4]

Just as Elona has an African theme, and Cantha has an Asian theme, Xotecha was to have a mainly Mesoamerican aesthetic along with elements from South America. Concept art depicts architecture from Mitla and El Tajín, reoccurring Xicalcoliuhqui motifs, codex art, statues from Tula, an Olmec colossal head, Mayan pyramids, stone carvings, and script. A flying dragon was present, recalling the feathered serpent deity. Inca stonework and domesticated llamas, both unique to South America, can also be seen.

Production for Utopia was "well underway" in October 2006 and cancelled in "early 2007".[5] At the time, ArenaNet intended to release a new standalone Guild Wars campaign once every six months, which would have put the release date for Utopia at around April 2007.

The existence of Utopia first came to the attention of the community in December 2006, when a domain name and a trademark from June 2006 were found.[6] An NCsoft employee referred to it as a "cancelled project" at the time.[7] PC Gamer magazine no. 161, May 2007 formally announced that 'campaign four' (as it was publicly known) had been cancelled and would be repurposed into the first Guild Wars expansion Guild Wars Eye of the North, which would lead in to Guild Wars 2. A thread by ArenaNet concept artists on the now-defunct conceptart.org forums containing a mixture of 'campaign four', Eye of the North, and Guild Wars 2 concept art provoked further community speculation. 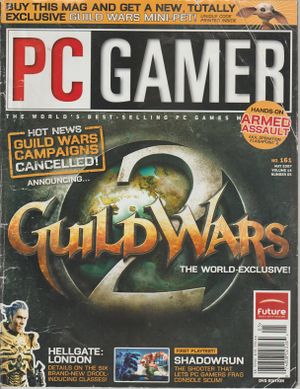 The front cover of PC Gamer no. 161, May 2007, announcing the cancellation of campaign four.

We’re guessing you’re wondering what we’re wondering: Why mess with success? It's not as though Guild Wars isn’t a financial triumph, despite its unusual business model (it’s the only major MMO without a monthly subscription fee). It’s hardly lacking in depth (more than 1,000 skills support 10 professions, and each character has a primary and secondary profession); aesthetic appeal (lush settings recall African savannahs, ancient Asian temples, and posh Arabian castles, among other gorgeous environs); or ways for players to spend their time (ArenaNet says a “shockingly large” number of GW players have logged more than 2,000 hours of playtime). And, given that the development team has aimed to release a new campaign every six months or so (despite missing that deadline by six months for the second campaign), one might assume that every Guild Wars designer's wildest ideas have found a home somewhere between the lands of Tyria and Elona.

But, in fact, the restrictions of the every-six-months model meant the team found itself perpetually wistful over what didn't make it into the game.

“We sat down to discuss what was going to go into Campaign 4 and realized we couldn't do all the things we wanted,” says Game Designer Eric Flannum. “Why? Partly because we’d need more time [than six months], and partly because some ideas wouldn't work well with things we’d done before.”

At that point, there were still no plans to fix a system that didn’t seem broken. But ArenaNet Co-Founder Jeff Strain decided to let everyone “freestyle a little bit,” he says. “And the more we talked, the more excited we got about what we could be doing.”

What the team felt it couldn’t do was implement its exciting new ideas in the game’s current campaign-every-six-months plan. While the promise of fresh standalone content twice a year sounds great to players, its requirements have actually caused Guild Wars to become somewhat convoluted from a game-design perspective.

“With each new campaign, we’ve been trying to introduce brand-new mechanics that change how the game plays. That’s led to the need for larger and larger tutorials to explain the new mechanics, and it’s made each campaign’s beginning experience much more bloated,” explains Flannum. “And since every new campaign was aiming to bring in new players—thus requiring bigger and bigger tutorials—plus aiming to give stuff to older players, the list of skills just kept growing.” Each campaign that’s been added to the Guild Wars world—three in total—has added another layer of design that, in the name of making things easier for new players, has actually ended up creating barriers to entry as they try to sort through multiple training areas, increasingly intricate tutorials, and an ever-ballooning list of skills.

“We’re battling against complexity,” Strain adds. “We don’t want to make complicated games. We want to make fun, easy-to-grasp games that are easy to get into and not frontloaded with complexity.”

As the team considered its situation – how to uncomplicate the current campaign model and add new, cool features without making the game any more Byzantine – what began as a brainstorm about Campaign 4 evolved into the blueprint for a completely new game.

“We kept changing the scope of what we were doing, until it became Guild Wars 2,” Flannum says with a shrug and a smile.

ArenaNet's abrupt about-face is a shock, but not necessarily an unpleasant one. When a dev team with a track record of doing great stuff announces it wants to focus on doing more great stuff, there's little to complain about-except that Guild Wars 2 won’t be coming out in six months, or even six months after that. (More like two years, says ArenaNet—expect a beta sometime in 2008.) 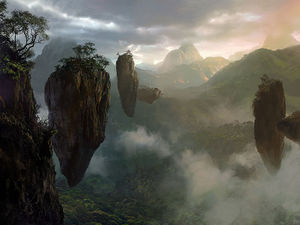 Artwork that would eventually be used as the Tarnished Coast loading screen.

Some of the assets developed for Utopia were used in Eye of the North.[3] For example, the Tarnished Coast and Woodland Cascades are built from assets originally intended to represent Xotecha. Codex art can still be seen in Vlox's Falls, and nepantla motifs survived on the pyramids used throughout the region. The Asura, who inhabit the Tarnished Coast, were originally a cave-dweller species in Utopia (and there is a nod to this in their Eye of the North lore). Their original aesthetic can still be seen in places such as Boreal Station, and their new aesthetic in areas like Rata Sum (although in lore, the architecture there was actually built by a prior civilisation hinted to be the Orrians, Mursaat, or Seers rather than the Asura).[8]

The floating head that appears on the first floor of the Sepulchre of Dragrimmar was a design motif for one of the races that was a part of the Utopia campaign.[9]

Golems also featured in Utopia, although in Utopia they were created by the Old Gods rather than the Asura.

Concepts for creatures called "tanneks" likely evolved into the Destroyers of Eye of the North and Guild Wars 2.

In Guild Wars 2: Heart of Thorns, the Chronomancer is an elite specialization for the Mesmer profession.

There are a couple that I know of; the NPC dialogue above is likely such a hint, as is the Preserved Red Iris Flower. You can safely bet that at least some of the dialogue about mysterious islands, unknown waters or items seemingly displaced from their origin was plot foreshadowing for the next story. Most of it was co-opted into Eye of the North; that which remains, like Prince Mehtu's boasting, is perhaps in the realm of myth, rumor or simply interesting facets of the world that the player character was never involved in.