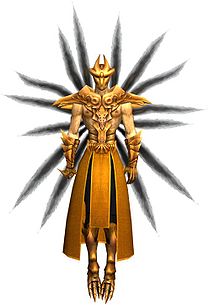 The Mursaat, also known as "The Unseen Ones", are a race of floating humanoid spellcasters. They have the ability to hide themselves from those who do not have the gift of True Sight and are worshiped by the White Mantle. They are tall and thin, have bird-like feet with three elongated toes, and have wing-like appendages that allow them to float. Covering their faces and body with golden masks and armor, they are often seen with their jade construct minions and towers.

Not much is known of the Mursaat's history before the year 1070 AE, other than that they predate humanity, alongside the Dwarves and Seers.[1] In the time before the gods brought humans to Tyria, the Mursaat and the Seers were sworn enemies, with the Mursaat having emerged victorious in the last war between the two races.

The Mursaat are a group of notable antagonists in Guild Wars Prophecies and Guild Wars Beyond.

Rise of the White Mantle[edit]

Although the Mursaat were alive long before the Exodus of the Gods, it wasn't until after the Guild Wars they were discovered in a "dense forest", likely somewhere near the Ullen River by the Krytan exile Saul D'Alessio. When Saul found the Mursaat, he was on the brink of death and saw the Mursaat as godlike creatures. Saved by the Mursaat, he returned to Kryta proclaiming them as the Unseen Ones, forwarding his cause through the reformation of the White Mantle.

The White Mantle and their Unseen gods rose to prominence following the Charr invasion of Kryta. At the height of the invasion, Saul and his most dedicated followers embarked on a suicide mission to assassinate the Charr leaders in their main encampment. Though the plan succeeded, the rest of the Charr army rained down upon them. In this moment, three Mursaat - Optimus Caliph, Mercia the Smug and Lazarus the Dire - appeared and fought beside the Mantle, decimating the Charr with their devastating magic. The Charr were defeated and Kryta was saved - but at a high price.

When the Charr were defeated, the Mursaat turned on the White Mantle and murdered most of them to eliminate any eye witnesses. Saul, realizing his devotion had been in error, was taken away by the Mursaat. Only three of the White Mantle members present were spared: Dorian, Hablion, and Thommis, each of whom the Mursaat deemed devoted enough to keep their mortal forms a secret. The three survivors told the Krytans that Saul had been killed by Charr during their retreat back over the Shiverpeak Mountains, and later lead the creation of the White Mantle state. 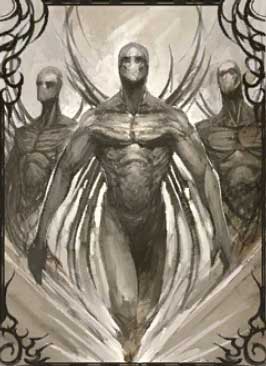 Concept art of the Mursaat

For two years the Mursaat held a firm grip on Kryta, with the White Mantle gaining more and more power and followers. But they knew they were not invincible - Glint's Flameseeker Prophecies foretold of the demise of their species at the hands of the Titans. To prevent this from happening, they had the Mantle retrieve the Scepter of Orr and sealed off the Door of Komalie, which held the Titans back inside the Foundry of Failed Creations. The Door of Komalie was powered by the soul batteries, annually charged by reaping the souls of the Chosen on the bloodstone in the Maguuma Jungle.

A group of Ascalonians, taking refuge in Kryta from the Charr after the Searing, discovered these rituals and retaliated against the White Mantle. They joined the Shining Blade, a group opposing the White Mantle, and eventually went through Ascension and had their armor infused with Spectral Essence, which allowed them to see the Mursaat and withstand their agonizing abilities. The Ascalonians traveled to the Ring of Fire Island Chain to open the Door of Komalie, which Vizier Khilbron told them would put an end to the Mursaat. The door was opened, the Titans were let loose across Tyria, and most of the Mursaat were exterminated.

Lazarus the Dire, one of the Mursaat present at the rise of the White Mantle, had split himself into many different aspects, infusing them into a group of White Mantle under the pretense that it was a gift of power. After the Titans were defeated, he began to free these aspects one by one, in a bid to reunite them and regain his former self. Justiciar Naveed, the host of the final aspect, had long since realized that this was no gift but a curse (as the process to remove the aspect killed the host), and he sought to free himself from it before it consumed him. With the help of the talented Asura Glayvin, they were able to damage the aspect but not remove it. Once Lazarus reclaimed the aspect, he felt his power turn on him. With his plans ruined, he fled to go into recovery, promising that countless future generations would suffer as a result of Naveed and the Asura's actions that day.

Since the Titans' release, at least eight Mursaat are known to have survived, and seven of them have continued to lead the White Mantle until the end of the Krytan civil war. Although these seven are known to have been killed off, Lazarus' fate and if other Mursaat survived, is still unknown.

All Mursaat names consist of first, a name, usually Greek or Anglo Saxon, but not always. After the name, there is "the", then an adjective. The rules for the Mursaat name fit into this template: <Name> The <Adjective>. Examples include Oizys the Miserable and Talios the Resplendent. However, there are sometimes exceptions, like Optimus Caliph.