Dhuum was once the God of Death. During his reign, Dhuum ruled from his tower in the Underworld, and tolerated neither resurrections nor the existence of the undead, and he hunted down all those who escaped death, having promised "death undeniable."

Long before the Exodus of the Gods, Dhuum was challenged and usurped by Grenth and seven heroes who followed him and was struck down in the ossuary of the Cathedral of Eternal Radiance in Orr. Dhuum's tower was shattered, creating the Chaos Plains, and his power was transferred to Grenth, who sealed him within the Hall of Judgement behind enchanted doors and layers of divine magic as he was unable to destroy Dhuum. There, Dhuum bided his time, gaining power every time a creature dies in the Underworld. Sometime before the Flameseeker Prophecies could be realized, the upheaval in Tyria allowed the army of Dhuum to launch an assault on the Underworld, imprisoning Grenth's Reapers and taking control of large portions of the realm. Other agents of Dhuum allied with servants of Abaddon during the attack on the Tomb of the Primeval Kings, during the disruption of the 1585 CC Dragon Festival led by the Fury, and finally in the Realm of Torment during Nightfall, along with Menzies' forces.

Years later, Dhuum was able to accumulate enough power to break free of his bonds, but forces led by King Frozenwind were able to defend the Reapers long enough for them to perform a ritual to return him to his dormant state.

"WITH EVERY DEATH, DHUUM GROWS STRONGER!"
"HOW CAN YOU HOPE TO VANQUISH DEATH ITSELF?"
"PATHETIC MORTAL! THE VOID BECKONS!" 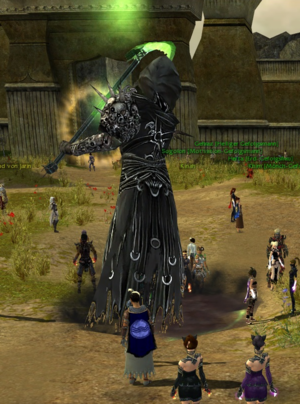 A player was just taken by Dhuum

Bug.After defeating Dhuum, King Frozenwind sometimes fails to teleport you into his chamber, which prevents you from getting the Underworld chest.