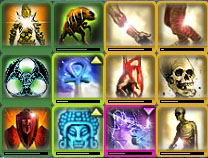 The duration of each effect is displayed as a small bar inside the icon. For effects which last indefinitely or until a specific action occurs a certain number of times, no bar is displayed.

Duration is the amount of time an effect lasts. Duration is always specified in skill descriptions and is measured in seconds. The amount can be fixed or vary with a skill's attribute; it can also be increased or decreased by other factors. Duration applies to effects such as conditions, enchantments, wards, hexes, and shouts.

In practice, durations always last an exact number of seconds, even though modifications should, in theory, end up with fractions of a second. Testing reveals that fractions parts below 0.5 are rounded down (20.4 becomes 20); those at least half a second are rounded up (20.5 becomes 21.0).

Durations can be modified by other skills, by conditions, or by equipment. These increases and decreases are always measured in percentages.

In addition, some effects can be canceled or renewed by skills or changing circumstances. For example, some shouts are completely renewed when a chant or another shout is applied, while engaging a stance automatically ends any existing one.

Other factors that affect skill duration[edit]

Other factors that are not skills are designed to either increase or decrease the duration of certain effects.