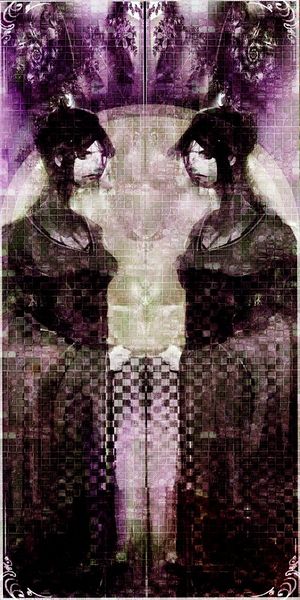 Mosaic of Lyssa in Gandara.

And it was, that a stranger came to the village of Wren seeking shelter and employment. Though young in years, her body was stooped and twisted, her flesh eaten by disease. "Ye have the mark of plague upon ye," said the citizen named Gallrick. "Leave this place lest you sicken our people."

"I've lost my family and my home," cried the desperate woman. "Have you no heart?"

Yet each person, in turn, did look away.

Then from the crowd came a young woman, Sara. She looked upon the woman with pity. "If you need help," said Sara, "I will give it." And Sara did approach the gnarled, bent woman and did offer her a helping hand.

Then the sickened woman pulled from her body the robes of plague, revealing Herself to be the goddess Lyssa.

The people of Wren fell to their knees, begging Lyssa's mercy. But lifting Sara gently, saith She, "True beauty is measured not by appearance but by actions and deeds. Many have eyes, but few have seen. Of all here, you saw the beauty behind the illusion. And you alone shall be blessed with My gifts."

Lyssa spent time living among the humans, veiled and hidden, in the village of Wren. However, when Arah was completed she was called to join the other Gods. Lyss, half of the twin Goddess, is extremely important to the people of Vabbi, who believe that it was she who shaped their lands, and that they were molded in her own glorious image.

In most of the world, Lyssa is portrayed in the same way: as twin figures of exquisite beauty entwined in an eternal dance. When the world has the Favor of the Gods, a golden light appears around the base of statues of Lyssa, and the statues are enveloped in a brilliant white light, casting off any vegetation that has grown on the statue since the world last held Favor.